The feature of Universal Restore added to EASEUS Todo Backup is a fully integrated module that is designed to restore the image from the system originally backed up to a hardware platform with a dissimilar processor, different motherboard or a different mass storage device, as well as ensure the server or workstation can boot its operating system normally after a restoration/deployment.

• Instant recovery from a failed hardware after disaster strikes and cannot find an exact match for the original system specifications;

With Universal Restore, complete system recovery can be simply achieved from an image, with no time-consuming reinstallation of the operating system, applications & settings and data, while ensuring business continuity.

Easy to use and works well as its users have said, EASEUS Todo Backup is well compatible with Windows 2000/XP/Vista/7 and server 2000/2003/2008 and supports both FAT and NTFS file systems. You can get the peace of mind that you can restore your backups to a new server or workstation, significantly saving a lot of time to recover from a catastrophic hardware failure.

EASEUS Todo Backup Server for $199.00 is available at http://www.todo-backup.com/business/server-backup.htm .

EASEUS Todo Backup Technician only priced $799 specifically for technicians and IT consultants available at http://www.todo-backup.com/business/technician-backup.htm . 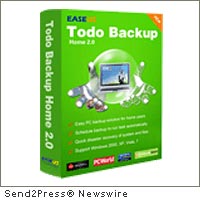 NEWS ARCHIVE NOTE: this archival news content, issued by the news source via Send2Press Newswire, was originally located in the Send2Press® 2004-2015 2.0 news platform and has been permanently converted/moved (and redirected) into our 3.0 platform. Also note the story “reads” counter (bottom of page) does not include any data prior to Oct. 30, 2016. This press release was originally published/issued: Tue, 22 Feb 2011 18:55:41 +0000