This hard disk upgrade tool can largely simplify the process of upgrading hard disks. Its disk clone feature enables users to copy the whole hard disk including the operating system, applications and settings, files and folders to a larger, faster and newer disk while still maintaining the machine as it is.

Also, some technicians can save a lot of time with this hard disk upgrade software to deploy the new hard disk for a number of workstations or servers by simply cloning the pre-existing drive to a new hard drive quickly. It no doubt reduces the work traditionally required for hard disk upgrading and ensures business continuity as well.

Apart from the “disk clone” feature, EASEUS Todo Backup also provides disk and partition backup for hard disk upgrade, especially for system transfer to machines with dissimilar hardware configuration or different disk interface, and the feature of Universal Restore helps a lot in this case.

Reported one user: “I was impressed by the ease and results of my cloning experience – was easy and worked well. I certainly would recommend this program for this use. Very impressive and easy to use software, I just Love it.”

Highly recommended by its users, EASEUS Todo Backup is compatible with Windows Server 2000/2003/2008 and Windows 2000/XP/Vista/7, and supports any hard drive with FAT, NTFS, Linux Ext2 and Ext3 file system. And users can even resize the hard disk or partition during hard disk cloning for better disk management.

Pricing and Availability:
EASEUS Todo Backup Workstation for $39.00 is available online at http://www.todo-backup.com/business/workstation-backup.htm .

EASEUS Todo Backup Server for $199.00 is available at http://www.todo-backup.com/business/server-backup.htm .

EASEUS Todo Backup Technician only priced $799 specifically for technicians and IT consultants available at http://www.todo-backup.com/business/technician-backup.htm . 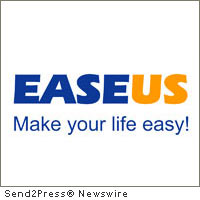 NEWS ARCHIVE NOTE: this archival news content, issued by the news source via Send2Press Newswire, was originally located in the Send2Press® 2004-2015 2.0 news platform and has been permanently converted/moved (and redirected) into our 3.0 platform. Also note the story “reads” counter (bottom of page) does not include any data prior to Oct. 30, 2016. This press release was originally published/issued: Tue, 01 Mar 2011 22:51:51 +0000