EASEUS Todo Backup can clone Windows Operating System hard drives and other non-system disks exactly in order to upgrade the hard disk to a new and larger one, saving your time and troubles to reinstall Windows and all applications. It’s comfortable to use with a sleek interface that guides you through the whole process of cloning a hard drive step-by-step.

With the most popular file systems, FAT and NTFS, supported, this clone software can duplicate any hard drive under Windows. Moreover, to clone a Linux Ext2 and Ext3 partition will be an easy task via sector by sector clone. EASEUS Todo Backup helps clone a hard drive to any other hard drives, even with different interface, like from SATA to SCSI. For better disk management, it allows you to resize the hard disk partition during cloning.

Meanwhile, to clone or restore an operating system to dissimilar hardware, Universal Restore built-in to EASEUS Todo Backup is included. As for cloning Server hard drives, this Windows Server cloning software is highly recommended; it will clone the entire hard drive for disk upgrading, saving a lot of time to deploy a new hard disk on Windows Server.

EASEUS Todo Backup has been called the best drive cloning backup software by one CNET editor: “EASEUS Todo Backup is a simple, free disk clone tool for Windows and we are impressed on how well this product looks and performs.”

EASEUS Todo Backup Workstation for $39.00 is available online at: http://www.todo-backup.com/business/workstation-backup.htm .

EASEUS Todo Backup Server, at 35 percent off special offer, now for $129.35 (normally $199) is available at: http://www.todo-backup.com/business/server-backup.htm . 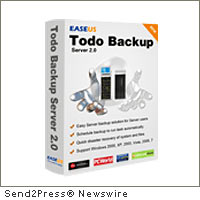 NEWS ARCHIVE NOTE: this archival news content, issued by the news source via Send2Press Newswire, was originally located in the Send2Press® 2004-2015 2.0 news platform and has been permanently converted/moved (and redirected) into our 3.0 platform. Also note the story “reads” counter (bottom of page) does not include any data prior to Oct. 30, 2016. This press release was originally published/issued: Tue, 15 Mar 2011 19:02:58 +0000