Running of the Bulls in New Orleans Marks 5th Year with Biggest Fest Yet!

NEW ORLEANS, La., May 26, 2011 (SEND2PRESS NEWSWIRE) — Some people mark their 5-year anniversary with a wooden gift, perhaps a replica of an official Major League Baseball Louisville Slugger. Nola Bulls does it with baseball bats too, only theirs are plastic and wielded by Rolling Bulls! San Fermin in Nueva Orleans (SFNO) will release hundreds of “Roller Bulls” on its streets again, led by the Big Easy Rollergirls. El Encierro, or Running of the Bulls in New Orleans, is the featured event in a 4 day festival from July 7-10, 2011.

Big changes for this year’s events include a Wine Dinner and a new starting venue and route.

THURSDAY JULY 7 – 6:30 p.m.:
Marques de Caceres Wine Dinner at Rambla, 217 Camp Street in the International House Hotel. Sangria reception followed by dinner paired with 5 wines from the famed Rioja winery. Special guest from the winery, Luis Burgueno, will be on hand to lead you through the wines.

FRIDAY JULY 8 – 6 p.m.:
El Txupinazo (choo-pee-NAHT-so) will start the weekend festivities off at The Chicory (610 S. Peters St.). Ven Pa Ca will perform flamenco music and dance at this Fund-Raising event. Tapas from Vega Tapas are the fare and sangria, Marques de Caceres wines, Stella Artois beer, and cocktails are the libations. The popularity of this event has grown from its inception in 2008 and will grow again.

SATURDAY JULY 9 – 8 a.m.:
The featured event, El Encierro (Running of the Bulls), will again commence at precisely 8 a.m. on Saturday July 9 at Ernst Cafe (600 S. Peters Street). This is a NEW starting point, so please plan accordingly. This FREE EVENT will feature hundreds of Roller Bulls from around the country led by our own Big Easy Roller Girls who will chase down and “gore” thousands of corredores (runners) dressed in the traditional white clothes with red sashes and neckerchiefs (traditional clothes not required, but encouraged).

El Encierro is a “run at your own risk” event. All ages are welcome, but participants under 12 and participants with strollers ARE REQUIRED TO USE THE SIDEWALK. Arrive early to view the Procession of San Fermin at 7:30 a.m.

SUNDAY JULY 10 – 12 p.m.:
El Pobre de Mi closes out SFNO 2011 with a tapas brunch, and specialty cocktails. The featured Ernest Hemingway Contest will once again be produced by NOLAFugees.

Information for all events is available at www.nolabulls.com and www.facebook.com/nolabullsllc .

The Nola Bulls will be making a donation with part of the proceeds to two entities. Once again we will make a donation to Animal Rescue of New Orleans for their continued care and devotion in finding permanent homes for lost and abandoned animals. The second great charity for 2011 is the National Multiple Sclerosis Society’s Louisiana Chapter. The National MS Society: Louisiana, founded in 1972, is a not-for-profit agency serving nearly 4,000 people with MS and their families living in the 64-parish territory of Louisiana.

Nola Bulls, LLC was founded in 2007 and is a provider and promoter of entertainment and cultural events in the New Orleans area. “Improving New Orleans Culture One Festival At A Time.” 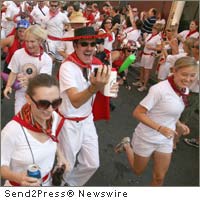 Alternate Headline: El Encierro, or Running of the Bulls in New Orleans, is the featured event in a 4 day festival from July 7-10, 2011

NEWS ARCHIVE NOTE: this archival news content, issued by the news source via Send2Press Newswire, was originally located in the Send2Press® 2004-2015 2.0 news platform and has been permanently converted/moved (and redirected) into our 3.0 platform. Also note the story “reads” counter (bottom of page) does not include any data prior to Oct. 30, 2016. This press release was originally published/issued: Thu, 26 May 2011 18:44:06 +0000

LEGAL NOTICE AND TERMS OF USE: The content of the above press release was provided by the “news source” Nola Bulls LLC or authorized agency, who is solely responsible for its accuracy. Send2Press® is the originating wire service for this story and content is Copr. © Nola Bulls LLC with newswire version Copr. © 2011 Send2Press (a service of Neotrope). All trademarks acknowledged. Information is believed accurate, as provided by news source or authorized agency, however is not guaranteed, and you assume all risk for use of any information found herein/hereupon.