* Exchange Server backup – easily backup and restore MS Exchange Server 2003, 2007, and users can be back to work sending and receiving e-mails in seconds.
* SQL Server database backup – full backup SQL database and log without interrupting MS SQL Server running. You can also backup and restore one or more databases simultaneously.
* Advanced backup scheduler – automate regular backups for a “set it and forget it” backup and protect the server at any time.
* Disk and partition clone – clone or transfer a hard disk, partition or dynamic volume to another.
* Conveniently install program without system rebooting.

Pricing and Availability:
EaseUS Todo Backup Advanced Server for $299 is available at: http://www.todo-backup.com/business/advanced-server-backup.htm .

EaseUS Todo Backup Technician for $799.20 (originally $999) is available at: http://www.todo-backup.com/business/technician-backup.htm . 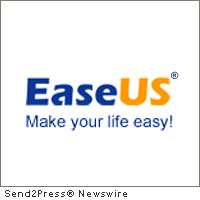 NEWS ARCHIVE NOTE: this archival news content, issued by the news source via Send2Press Newswire, was originally located in the Send2Press® 2004-2015 2.0 news platform and has been permanently converted/moved (and redirected) into our 3.0 platform. Also note the story “reads” counter (bottom of page) does not include any data prior to Oct. 30, 2016. This press release was originally published/issued: Fri, 19 Aug 2011 10:59:22 +0000