Be anything you want to be! Tonight is the night to bring out your ultimate costume. You know that costume that you’ve had your eye on (or it’s already in your closet) that makes even your crazy friends say “Wow – that’s over the top!” Crazy wigs? Yes. Daring shoes? Yes! Clothing that need double-sided tape to stay in place? Oh, Yes! Let your imagination run wild!

This year we are proud to offer a Grand Prize for the best overall costume that consists of: A Grand Prize Costume Prize of $1,000 presented to the Best Costume of the Party!

And then, we have $3,000 more in prizes to reward the winners in the other seven Costume Categories!

This is one of the biggest Halloween parties in Seattle. Like every year, we’re expecting over 1,200 guests to join us at The Showbox at the Market in downtown Seattle. We’ll have 2 rooms of entertainment (the main stage and the Greenroom), theme decorations, a gigantic costume contest and a fun mix of activities and games for everyone that attends. 21 and over, ID’s are required.

We are proud to announce that we’ll have the following entertainment for the evening.

* Live DJ: DJ FUNKDADDY, one of the hottest deejays and producers on the left coast! So talented that he has received numerous awards, and has been featured on movie and television soundtracks. His presence beyond the Emerald City is felt nationwide. Since the start of 2003, he has been the star deejay for Russell Simmons and Kimora Lee’s Phat Farm fashion show and he has been traveling to Las Vegas to perform with 2 Short. He will keep the party going all night long!

$29 early-bird tickets are on sale now by visiting the official event Web site at www.halloweenseattle.com and following the links to the ticket page. 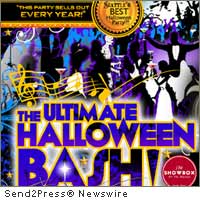 NEWS ARCHIVE NOTE: this archival news content, issued by the news source via Send2Press Newswire, was originally located in the Send2Press® 2004-2015 2.0 news platform and has been permanently converted/moved (and redirected) into our 3.0 platform. Also note the story “reads” counter (bottom of page) does not include any data prior to Oct. 30, 2016. This press release was originally published/issued: Thu, 06 Oct 2011 18:34:25 +0000

LEGAL NOTICE AND TERMS OF USE: The content of the above press release was provided by the “news source” Halloween Seattle or authorized agency, who is solely responsible for its accuracy. Send2Press® is the originating wire service for this story and content is Copr. © Halloween Seattle with newswire version Copr. © 2011 Send2Press (a service of Neotrope). All trademarks acknowledged. Information is believed accurate, as provided by news source or authorized agency, however is not guaranteed, and you assume all risk for use of any information found herein/hereupon.