SEATTLE, Wash., Oct. 21, 2014 (SEND2PRESS NEWSWIRE) — PULSE the Ultimate Halloween Bash 2014 at the EMP Museum will continue its long tradition of being the most-anticipated Halloween party in downtown Seattle. PULSE has sold out every year for the last 12 years due to its outstanding location, value, and the most impressive and elaborate costumes in the city.

PULSE the Ultimate Halloween Bash at the EMP Museum provides 2,000 attendees with one of Seattle’s premier live bands, a top spinning DJ, and access to most exhibits of the EMP Museum itself included with admission. There is also a special VIP section for a premium price.

Selected details from the PULSE website (which can be found at www.HalloweenSeattle.com):
– 2,000 party guests dressed in amazing and creative costumes;
– Sky Church Stage, which boasts the world’s largest LED screen, features the Brand X High; Energy Party Band, noted for playing the most popular party hits from the 70s, 80s, 90s and today;
– Also appearing on the main stage is DJ Funk Daddy spinning and mixing live for the crowd;
– Nearly 100,000 sq ft of party area for guests to party the night away right underneath the iconic Space Needle;
– Access to most exhibits of the EMP Museum is included with admission (a $20 value);
– Pre-party “Cocktail Hour” for singles.

“PULSE the Ultimate Halloween at the EMP Museum” continues its tradition of being the most anticipated Halloween Bash in the Northwest on Friday, October 31, 2014 in the EMP Museum at 325 5th Ave North, Seattle, WA 98109. 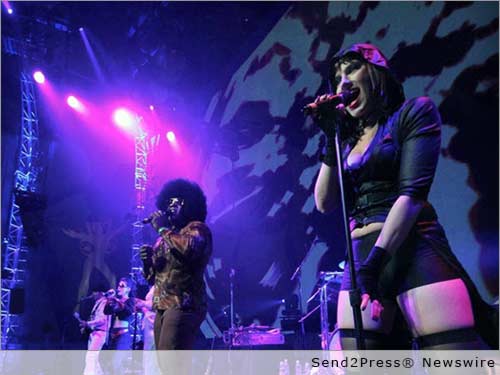 NEWS ARCHIVE NOTE: this archival news content, issued by the news source via Send2Press Newswire, was originally located in the Send2Press® 2004-2015 2.0 news platform and has been permanently converted/moved (and redirected) into our 3.0 platform. Also note the story “reads” counter (bottom of page) does not include any data prior to Oct. 30, 2016. This press release was originally published/issued: Tue, 21 Oct 2014 13:09:58 +0000

LEGAL NOTICE AND TERMS OF USE: The content of the above press release was provided by the “news source” Halloween Seattle or authorized agency, who is solely responsible for its accuracy. Send2Press® is the originating wire service for this story and content is Copr. © Halloween Seattle with newswire version Copr. © 2014 Send2Press (a service of Neotrope). All trademarks acknowledged. Information is believed accurate, as provided by news source or authorized agency, however is not guaranteed, and you assume all risk for use of any information found herein/hereupon.