NEW YORK, N.Y., Oct. 13, 2011 (SEND2PRESS NEWSWIRE) — Within a few years, sales of millimeter wave systems will break the billion dollar per year mark in several markets, according to a new report by Thintri, Inc. (www.thintri.com). In divergent markets that include checkpoint security, consumer multimedia, automotive radar, telecommunications and others, technical and manufacturing developments that are expanding the capabilities of millimeter wave systems and bringing prices down to ranges demanded by mass markets while conventional (lower frequency microwave) systems struggle with performance limitations.

Systems using millimeter waves, at the upper end of the microwave spectrum, from roughly 20 GHz to 300 GHz, are breaking out of specialty applications like scientific research. Thanks to steady technology development over the last couple of decades that is bringing down cost, millimeter waves are now being exploited, or soon will be, in a broad range of markets that include security, defense, telecommunications, consumer products, medicine and health, manufacturing, and construction and infrastructure. Several of these markets will exceed billion dollar annual sales within the forecast period of the Thintri report, from 2011 to 2018.

For example, millimeter wave systems are already being deployed at airports for passenger screening. Similar systems are being used in inventory control and loss prevention, where companies are avoiding loss at warehouses due to employee theft. In loss prevention alone, addressable markets are in the hundreds of thousands of installations.

Millimeter wave telecommunications links are bringing broadband access to buildings otherwise inaccessible to optical fiber, with performance near that of optical fiber but at a fraction of the cost. The same links bring inexpensive broadband capability to enterprise and campus networks, and redundancy to critical optical fiber networks.

Consumer multimedia products will benefit from millimeter wave technologies that will allow wireless transfer of high definition video and other media within the home, and eliminate the tangle of cables around most home multimedia systems. Automotive radar systems at 24 GHz and 77 GHz are rapidly becoming established in mainstream, affordable cars.

Millimeter wave perimeter and surveillance radar for intrusion detection is moving outside defense to government and commercial use, such as protection of key assets like diplomats and executives.

Other markets, while not yet established, offer significant growth potential. Wireless patient monitoring for conditions like sleep apnea and other respiratory disorders will offer not only improved accuracy and capability but eliminate intrusive and uncomfortable wires. Construction and infrastructure will benefit from the ability to check structures for cracks and other defects, even under coatings or wallpaper, or detecting leaks in pipelines, vessels and other structures.

About Thintri, Inc.
Founded in 1996, Thintri, Inc. (www.thintri.com), is a full-service consulting firm, based in New York and directed by J. Scott Moore, Ph.D. 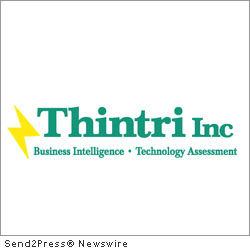 NEWS ARCHIVE NOTE: this archival news content, issued by the news source via Send2Press Newswire, was originally located in the Send2Press® 2004-2015 2.0 news platform and has been permanently converted/moved (and redirected) into our 3.0 platform. Also note the story “reads” counter (bottom of page) does not include any data prior to Oct. 30, 2016. This press release was originally published/issued: Thu, 13 Oct 2011 21:14:54 +0000

LEGAL NOTICE AND TERMS OF USE: The content of the above press release was provided by the “news source” Thintri, Inc. or authorized agency, who is solely responsible for its accuracy. Send2Press® is the originating wire service for this story and content is Copr. © Thintri, Inc. with newswire version Copr. © 2011 Send2Press (a service of Neotrope). All trademarks acknowledged. Information is believed accurate, as provided by news source or authorized agency, however is not guaranteed, and you assume all risk for use of any information found herein/hereupon.