Attendees of the stadium will experience a profound difference in wireless connectivity and data speeds with the integration. 5 Bars Inside™ designed and engineered the wireless network to meet or exceed the Major League Baseball Advanced Media (MLBAM) requirements and specification parameters. In order to ensure five-bar voice and data coverage and adequate capacity for SmartPhones, 5 Bars Inside will deploy a Distributed Antenna System (DAS) and Wi-Fi Network that provides total wireless connectivity.

5 Bars Inside™ will provide monitoring, maintenance and reporting for the network. Complete commissioning will take place the first half of the year.

“The 5 Bars Inside team has more than two decades of internal experience in developing and managing Wireless Service Providers DAS networks. We’re looking forward to creating a long lasting future with Angels Baseball and we look forward to assisting the team in developing an end-to-end wireless solution to support their dedicated fan base and internal partners,” said John Clarey, CEO for 5 Bars Inside. “We will ensure that fans can use voice and data services, even during capacity-crowd events.”

5 Bars Inside™ plans to build and optimize the system for their anchor tenant, AT&T in early 2014 in order to be fully operational for the MLB 2014 season.

About 5 Bars Inside:
5 Bars Inside™ is an Irvine, California based premier provider of indoor and outdoor distributed antenna systems, small cells and Wi-Fi networks. Venues that carry the 5 BARS INSIDE™ certification possess the highest standards of wireless connectivity.

For more information about 5 Bars Inside, please visit http://www.5barsinside.com/.

News issued by: 5 Bars Inside 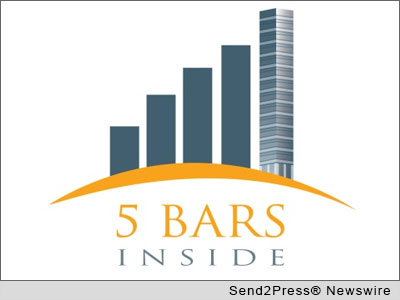 NEWS ARCHIVE NOTE: this archival news content, issued by the news source via Send2Press Newswire, was originally located in the Send2Press® 2004-2015 2.0 news platform and has been permanently converted/moved (and redirected) into our 3.0 platform. Also note the story “reads” counter (bottom of page) does not include any data prior to Oct. 30, 2016. This press release was originally published/issued: Mon, 16 Dec 2013 17:59:48 +0000

LEGAL NOTICE AND TERMS OF USE: The content of the above press release was provided by the “news source” XG Communities LLC or authorized agency, who is solely responsible for its accuracy. Send2Press® is the originating wire service for this story and content is Copr. © XG Communities LLC with newswire version Copr. © 2013 Send2Press (a service of Neotrope). All trademarks acknowledged. Information is believed accurate, as provided by news source or authorized agency, however is not guaranteed, and you assume all risk for use of any information found herein/hereupon.