LOS ANGELES, Calif., Jan. 21, 2022 (SEND2PRESS NEWSWIRE) — The Cursive is Cool® contest will be held as usual this year after encouragement from teachers, parents, and students, announced the American Handwriting Analysis Foundation today, despite some schools in the USA and Canada operating remotely, or using a hybrid model with in-person learning. In person education is on again, off again, hit or miss these days. Yet, Cursive is Cool Contest is reliable. 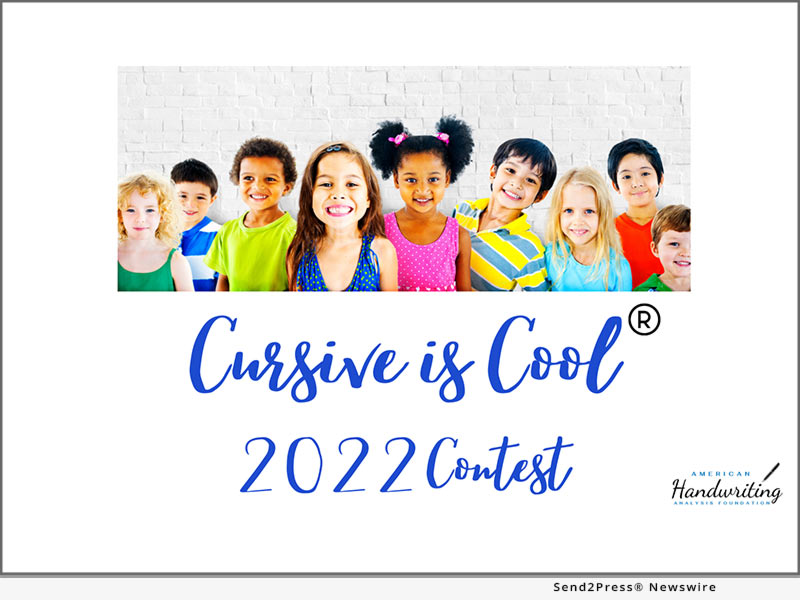 Modifications this year allow more students to participate who might not have teacher support as in the past.

Students are encouraged to enter early. A Random Drawing will be held this year at the conclusion of the contest. Prizes will be awarded for First Place, Second Place, Third Place, and a prize for the most Creative content. Those winners’ handwriting will be reviewed for legibility and neatness. One of each prize per grades 1 through 8 will be awarded.

The annual cursive contest has many supporters. In Canada they include Laywine’s and Zebra Pen (Canada). A new supporter last year is Blind Pig Press.

According to Sheila Lowe, President of the American Handwriting Analysis Foundation, “The good news from an informal survey indicates that more than half the states require at least some cursive writing training in public schools. Legislation is spending in six more. Only ten states have zero requirement to teach their students to write.”

USA and Canadian contest dates are January 23 through April 8, 2022.

“You don’t have to be the best writer this year

To win a prize that will bring you cheer.

Entering is the main thing to do

To win a prize to be sent to you!”

The Foundation is a 501-(c)6 non-profit organization, chartered and incorporated in California, and are the sponsors of Campaign for Cursive®, and will graciously accept donations.

View More Education and Schools News
According to Sheila Lowe, President of the AHAF, "The good news from an informal survey indicates that more than half the states require at least some cursive writing training in public schools. Legislation is spending in six more. Only ten states have zero requirement to teach their students to write."

LEGAL NOTICE AND TERMS OF USE: The content of the above press release was provided by the “news source” American Handwriting Analysis Foundation or authorized agency, who is solely responsible for its accuracy. Send2Press® is the originating wire service for this story and content is Copr. © American Handwriting Analysis Foundation with newswire version Copr. © 2022 Send2Press (a service of Neotrope). All trademarks acknowledged. Information is believed accurate, as provided by news source or authorized agency, however is not guaranteed, and you assume all risk for use of any information found herein/hereupon.