Slingshot Candy Shooter: A Free Game Designed for All Audiences

DETROIT, Mich., April 2, 2014 (SEND2PRESS NEWSWIRE) — It’s sweet! Slingshot Candy Shooter released by U.S. Publications, Inc. is a free HD game for iPhones and iPads. Designed for people of all ages – play alone or play with family and friends. Multiple players can face off on Facebook or a single player can have a little fun and simply unwind.

Slingshot Candy Shooter tasks players with hitting as many candy men as they can. Rocks are fired from a slingshot that is easily controlled with a tap of the finger. Just pull the slingshot’s elastic back and release.

A practice mode gives players the lay of the land and from there, the sky’s the limit. With unlimited levels, players can aim high. The game also saves previous levels achieved, so players don’t have to start from scratch each time they play.

Players rack up points based on distance and damage. And, a rocket launch feature can quickly catapult your score. Players can only move to the next level once they have filled up the points’ meter at the top of the screen.

Zoom play, replay features, catchy music and bold colors all make this free game an easy one to get hooked on. It will satisfy any sweet tooth and players are sure to be addicted in no time.

To get the free game, visit: https://itunes.apple.com/us/app/slingshot-candy-shooter-free/id843285370?mt. 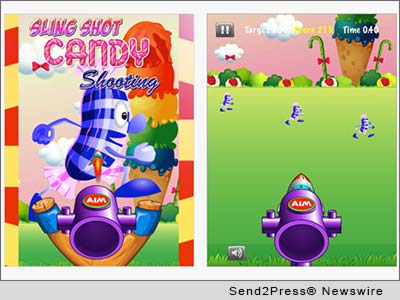 NEWS ARCHIVE NOTE: this archival news content, issued by the news source via Send2Press Newswire, was originally located in the Send2Press® 2004-2015 2.0 news platform and has been permanently converted/moved (and redirected) into our 3.0 platform. Also note the story “reads” counter (bottom of page) does not include any data prior to Oct. 30, 2016. This press release was originally published/issued: Wed, 02 Apr 2014 17:55:09 +0000

LEGAL NOTICE AND TERMS OF USE: The content of the above press release was provided by the “news source” U.S. Publications Inc. or authorized agency, who is solely responsible for its accuracy. Send2Press® is the originating wire service for this story and content is Copr. © U.S. Publications Inc. with newswire version Copr. © 2014 Send2Press (a service of Neotrope). All trademarks acknowledged. Information is believed accurate, as provided by news source or authorized agency, however is not guaranteed, and you assume all risk for use of any information found herein/hereupon.