"Our next generation is challenged with access to nutrient-rich, fresh food, critical to maintaining health and energy. Our goal is to teach young people how to grow superior produce within the urban environment while substantially reducing the use of limited natural resources such as water and fertilizer," said Erik Cutter, Managing Director of Alegria Fresh.

GardenSoxx® is an organic food production system that can be used over cement or other man-made surfaces. The “Soxx” are made of eight inch diameter polypropylene mesh and can be filled with any compost or planting mix.

“Our next generation is challenged with access to nutrient-rich, fresh food, critical to maintaining health and energy. Our goal is to teach young people how to grow superior produce within the urban environment while substantially reducing the use of limited natural resources such as water and fertilizer,” said Erik Cutter, Managing Director of Alegria Fresh.

Alegria Farm at the Great Park occupies a fifth of an acre but produces two-to-three times the output of a comparable farm plot, and with vastly less water. Veggies grown in towers use about 90 percent less water than conventional in-ground farming; growing in the Soxx uses 70 percent less.

The lettuce, cabbage, radicchio, onions, chard, celery, kale and other veggies in the hydroponic towers and Soxx grow faster and contain more vitamins and minerals because they get a steady flow of nutrient-rich water.

Bell Gardens High School students came to Alegria Farm after science teacher Jan Barber-Doyle learned about Cutter’s farm. Her environmental science class was questioning how technology can help feed a growing world population, what strategies can best conserve water and other resources and which practices can improve food safety. Barber-Doyle thought Alegria would be a good place to learn something about all those topics. “It connected all those concepts to the real world,” she said.

The students found the array of towers and racks and plants growing out of fabric tubes only mildly interesting — until Cutter mentioned what a great salsa could be made from the tomatoes, cilantro, onions and chilies that the students saw growing. That ignited a buzz.

How about a contest to see who could make the best salsa?

From that challenge, an unlikely partnership was born. Cutter built a bedroom-sized vertical garden in the quad of the high school campus, installing five vertical towers at the school, making it the only urban high school in Southern California with a working hydroponic vertical farm built by the students themselves.

Students tended the plants and planned the harvest celebration dinner complete with a salsa contest. In addition to the science class, students in the cooking class also joined the project and in July, students, parents and faculty voted on the first salsa contest winner.

“We’re on the edge of something very exciting here,” says Barber-Doyle, referring to the speed, small space and minimal resources needed to grow larger quantities of fruits and veggies than could be grown on a traditional in-the-earth farm. “Students constructed a solution to many of the food problems they studied.”

“We learned how we can help our community,” said David Bermejo of Bell Gardens, who will be a tenth grader in the fall. He said he and other students already are talking to city officials about how they might create a similar high-performance farm on some of vacant lots in Bell Gardens and nearby cities.

Students say they learned more than how to grow vegetables in the towers and Soxx. “We already are eating better,” said Lizbeth Yanez of Maywood, who also will be a tenth grader in the fall. Moreover, she said, “I never imagined this type of project – but it’s been fun to contribute and learn how to make an idea better.”

Cutter is as jazzed as the students.

“To me this is a game-changer. It’s great way to engage students in urban agriculture and get them to participate in what they grow and eat, plus it can lead to jobs,” said Cutter, a crusader for healthy eating who can riff on boosting plant nutrient content and human health with the enthusiasm of a television evangelist.

Alegria Farm produces an exotic variety of leafy greens, medicinal herbs and heirloom vegetables. Hydroponic farming is soilless and utilizes coconut fiber instead of organic soil, and produces strong plants that are nutrient-rich. For more information on Alegria Fresh or to schedule a tour of the farm, please visit http://www.AlegriaFresh.com/ or follow on Facebook and Twitter. Alegria Fresh is the high-performance urban agriculture division of EnviroIngenuity, a company dedicated to reducing waste. 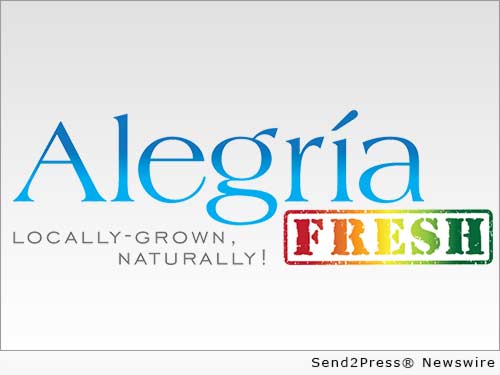 NEWS ARCHIVE NOTE: this archival news content, issued by the news source via Send2Press Newswire, was originally located in the Send2Press® 2004-2015 2.0 news platform and has been permanently converted/moved (and redirected) into our 3.0 platform. Also note the story “reads” counter (bottom of page) does not include any data prior to Oct. 30, 2016. This press release was originally published/issued: Thu, 25 Sep 2014 16:44:07 +0000

View More Agriculture News
"Our next generation is challenged with access to nutrient-rich, fresh food, critical to maintaining health and energy. Our goal is to teach young people how to grow superior produce within the urban environment while substantially reducing the use of limited natural resources such as water and fertilizer," said Erik Cutter, Managing Director of Alegria Fresh.