"Who doesn't like switching to a new phone?" asked Issac Wade, founder of FonePaw. "It is just the data transfer tasks that make people furious."

HONG KONG, China and NEW YORK, Aug. 12, 2015 (SEND2PRESS NEWSWIRE) — Many times, you curse the cumbersome ordeal of mobile data transfer and prepare to shake with fury. This time, you don’t have to just get a hammer, smash your phone and start over. FonePaw has launched a handy files migration tool called Mobile Transfer to help users transfer contacts, videos, photos and music from phone to phone with one click.

Mobile Transfer is stylish and dead easy to use. Simply install it on your computer, connect both the source phone and the target phone at the same time, select which data you want to move and start transfer.

“Who doesn’t like switching to a new phone?” asked Issac Wade, founder of FonePaw. “It is just the data transfer tasks that make people furious. So we developed Mobile Transfer to meet the requirements of mobile phone users as it can move data from the old phone to the new one quickly. Android and iOS devices users who upgrade their mobile phone a lot – or switch between carrier, manufactures and platforms frequently – can all benefit from this software.”

Feature Highlights:
* Installation is easy and quick. It requires very less memory and processor resources.
* It’s able to transfer contact, photos, videos, music and more from Android to Android, Android to iOS, iOS to iOS and iOS to Android.
* It’s quite fast itself but that will depend on the data you have on your source phone.
* Support for a variety mobile phone brands like Apple, Samsung, HTC, Sony, MOTOROLA, LG, HUAWEI, Acer, etc, basically almost all iOS and Android devices.

Price and Availability:
FonePaw Mobile Transfer is available at a no cost, no obligation 30-day trial. The option to experience the benefits of this product first-hand before a purchase truly makes this a risk-free opportunity. Free download of the trial version: http://www.fonepaw.com/downloads/mobile-transfer.exe.

After the trial period, the software is available from the FonePaw web store for an affordable price of $39.95. 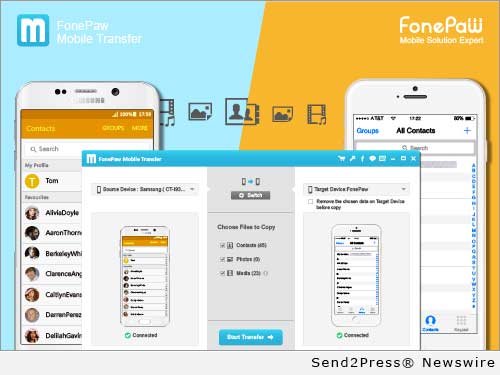 NEWS ARCHIVE NOTE: this archival news content, issued by the news source via Send2Press Newswire, was originally located in the Send2Press® 2004-2015 2.0 news platform and has been permanently converted/moved (and redirected) into our 3.0 platform. Also note the story “reads” counter (bottom of page) does not include any data prior to Oct. 30, 2016. This press release was originally published/issued: Wed, 12 Aug 2015 07:00:00 +0000

View More Apple Mac and iOS News
"Who doesn't like switching to a new phone?" asked Issac Wade, founder of FonePaw. "It is just the data transfer tasks that make people furious."

ABOUT THE NEWS SOURCE:
FonePaw

LEGAL NOTICE AND TERMS OF USE: The content of the above press release was provided by the “news source” FonePaw or authorized agency, who is solely responsible for its accuracy. Send2Press® is the originating wire service for this story and content is Copr. © FonePaw with newswire version Copr. © 2015 Send2Press (a service of Neotrope). All trademarks acknowledged. Information is believed accurate, as provided by news source or authorized agency, however is not guaranteed, and you assume all risk for use of any information found herein/hereupon.