CHICAGO, Ill., Aug. 29, 2016 (SEND2PRESS NEWSWIRE) — Riverpool Records and The PondHawks announce the release of the new focus track, “Wire Me” from the album “Blue Light.” The up-and-coming indie band is making waves not only on the radio, but also in social media. They have a quarter of a million likes on Facebook and thousands of followers on Twitter, MySpace and Reverbnation. 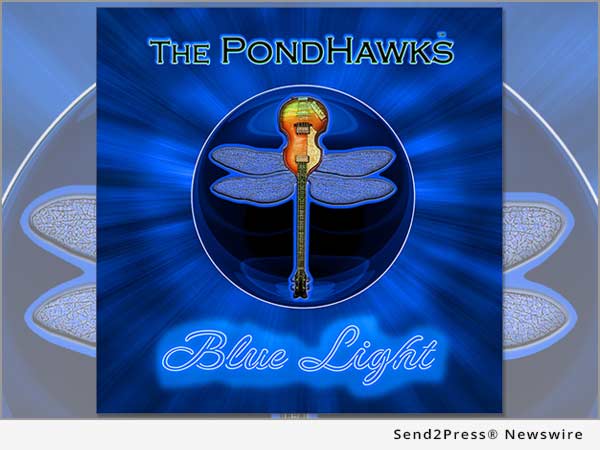 WHAT IS THE SECRET?

Formed in 2007 by songwriting partners Mario Novelli and Jorie Gracen, The PondHawks have since captured a worldwide audience with catchy melodies and a pioneering approach to music. Some may call it retro-rock with a now sound, but the band’s unique signature style falls into its own category.

The PondHawks have an artistry for storytelling, which evolves through meticulously crafted passages that create atmosphere and mood. Their music is driven by poetic lyricism that is clever and compelling. Stellar vocal harmonies intertwine seamlessly through musical interludes that unfold with stunning synchronicity and energy. Instruments are carefully selected to drive the melody and the emotional power of the song.

The band’s hit song “Drive,” from “Dreaming Over Ireland,” charted at #1 on Music World Radio’s Top 20 Alternative Songs Euro Chart. Votes from thousands of fans from around the world kept the song at #1 for 13 weeks.

When The PondHawks’ new holiday song “Winter Wine” premiered on a UK radio station in December 2015 — their first new music in three years — 45,842 listeners from around the world tuned in to listen. At the time the song aired, it was 11:50 p.m. EST and 4:50 a.m. in Europe.

At a recent outdoor concert headlined by the band, 8,000 fans showed up. Some traveled long distances from other states and many sported PondHawks T-shirts.

In The PondHawks’ hometown of River Grove, a suburb of Chicago, phone calls from fans flooded the Mayor’s office when the band’s June concert was cancelled due to weather.

THE SECRET IS OUT:

The album is receiving robust radio airplay in the U.S. and Europe with all 10 songs popping up on radio station playlists.

Two days after the album’s first single, “Bitter Game” was released, it charted at #3 in the Top 15 Reverbnation Picks of the Week posted by A Journal of Musical Things.

Alan Cross, music critic at A Journal of Musical Things, writes: “The PondHawks have a mid-to-late ’60’s sound that brings to mind a combination of The Beatles and David Bowie.”

Alan Haber of Pure Pop Radio said this about Blue Light: “This Chicago trio is a melodic treat, melding retro and contemporary influences for a decidedly catchy listening experience. Clever touches delight across the whole program, from the mandolin-powered ‘Armadilla,’ with its playful vocal harmonies, to the pop pleasures of four-on-the-floor pop-rocker ‘Bitter Game.’ Mario Novelli, Jorie Gracen and Michael Gillespie deliver a highly desirable album and win on all cylinders.”

After one listen to “Blue Light,” fans of The Beatles, Paul McCartney and Wings and ELO will be delighted to find a happy mix of pop, rock, and classic rock influences jam-packed with tasty Beatlesque flavors and psychedelia.

The PondHawks are currently the #1 ranked Indie band in the USA and the world on the Reverbnation charts. They were selected out of 3.7 million bands to join the prestigious Reverbnation Connect A&R group based in New York City. Connect’s A&R Director, Matt DuFour described The PondHawks’ music as “timeless.”

On Aug. 29, The PondHawks release their second focus track “Wire Me” from “Blue Light.”

ABOUT THE NEWS SOURCE:
The PondHawks

The PondHawks, are an original band from Chicago who are changing the style of Pop/Rock music. Catchy melodies are exhilaratingly fresh and Beatles-esque. The songs are delightfully infectious with playful lyricism that is exuberant and gutsy. The band's arsenal of music takes the listener on an eclectic journey into Indie Rock spirited by Classic Rock influences that transcend the boundaries of contemporary music. You could say The PondHawks have created a new music genre.

RSS News Feed for The PondHawks

LEGAL NOTICE AND TERMS OF USE: The content of the above press release was provided by the “news source” The PondHawks or authorized agency, who is solely responsible for its accuracy. Send2Press® is the originating wire service for this story and content is Copr. © The PondHawks with newswire version Copr. © 2016 Send2Press (a service of Neotrope). All trademarks acknowledged. Information is believed accurate, as provided by news source or authorized agency, however is not guaranteed, and you assume all risk for use of any information found herein/hereupon.