MESA, Ariz., Oct. 12, 2017 (SEND2PRESS NEWSWIRE) — The World Record Academy recently awarded Dr. Greg J. Marchand and his surgical team a world record for removing a 17-centimeter cancerous ovarian tumor using only small incisions in the abdomen, a technique called a laparoscopy. While removing cysts and tumors using laparoscopic surgery is a standard practice, Dr. Marchand said it is rare to use the technique in conjunction with an ovarian cancer staging procedure. 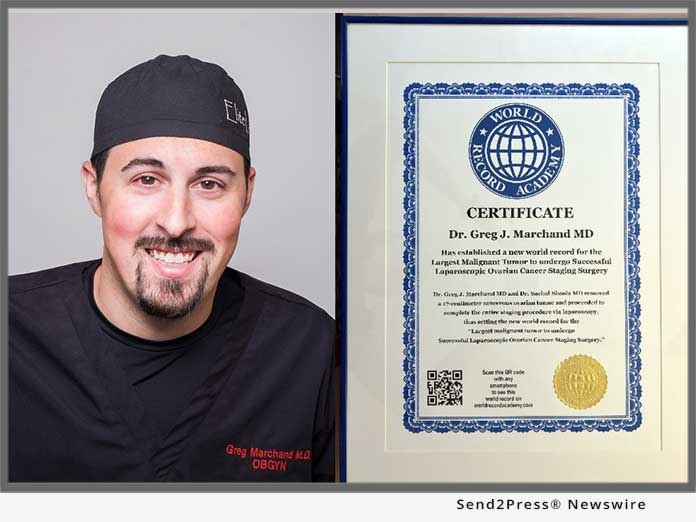 The surgeons completed the procedure using “in-bag” morcellation, a technique developed by Dr. Marchand in which the tumor is bagged and broken down inside the bag so the pieces can be safely removed through tiny holes. Otherwise, patients would need a sizeable incision to surgically remove such a large mass, requiring additional recovery time and a great deal more postoperative pain.

Marchand, a board-certified OB-GYN specializing in “minimally invasive surgery,” worked closely with a gynecologic oncologist in completing this amazing surgery.

The World Record Academy helped verify that this type technique had never been accomplished previously on any malignant tumor this large.

Dr. Marchand was diagnosed in 2010 with mixed-cell carcinoma, (an aggressive cancer of the testes,) said it is particularly gratifying that his technique can help cancer patients. He received surgery and treatments in 2010, and has been in remission since.

“I know what it’s like to face a diagnosis of cancer,” he said. “In my opinion, advancements in the surgical treatment of cancer are just as important as the newest cancer-fighting drugs and chemotherapy agents.”

“If we can use minimally invasive surgery to take some of the recovery time and complications out of cancer surgery, then I think we’ve really done a lot of good for patients fighting cancer.”

This is Dr. Marchand’s second world record in laparoscopic surgery. In 2008 Dr. Marchand was awarded a Guinness World Record for the removal of the largest uterus laparoscopically. In this case, it was not a cancerous mass, but a seven-pound benign (non-cancerous) uterus that was removed.

In addition to the two world records, Dr. Marchand is extensively published in laparoscopic surgery and was recently the first U.S. surgeon to receive the “Master Surgeon” recognition from The American Association of Gynecologic Laparoscopist’s (AAGL.org) and the Surgical Review Corporation (surgicalreview.org). Dr. Marchand is internationally regarded as an expert in developing and performing advanced surgical techniques, particularly in minimally invasive surgery. Dr. Marchand is currently the only “Master Surgeon” in the state of Arizona.

For further information regarding Dr. Marchand and his publications and research please visit http://gregmarchandmd.com/.

Why did it take so long for the World Record to be awarded?

To verify this record, we had to research all the other related surgeries that had been published to determine if ours was truly the largest malignant tumor ever surgically staged through completely laparoscopic means. After our research determined it was, we employed the World Record Academy who underwent their own verification process. Following the completion of these two independent verifications, we can now confidently say that this is likely the largest malignant ovarian tumor to ever undergo completely laparoscopic surgical staging.

What is “In-Bag” morcellation, how is it different from just breaking something apart, or regular morcellation?

In-Bag morcellation refers to the surgical technique of placing an object inside a bag, usually plastic, before breaking it into pieces. Usually the object is broken into small pieces so that it can be removed through small holes, thus not needing to make a large incision to remove the object. This high level of caution is reserved for objects that could contain cancerous cells. In the case of suspicion of cancerous cells, it is important not to spill the material back into the patient’s body cavities because cancer cells can “Seed” or begin new cancer colonies if they are moved around the body. In this case, we removed a 17-centimeter cancerous tumor through a hole that was approximately 1.4cm large. This technique is one of the more extreme examples of “In-Bag” morcellation.

What does this mean to you as a cancer survivor?

“I underwent surgery and treatments after I was diagnosed with Mixed Cell Testicular Cancer in 2010. I am very lucky that the surgery for my stage of Testicular cancer was a very minimally invasive procedure, and that I had a good surgeon. I remember the horrible fear of ‘just not knowing what was going to happen,’ and I think that fear is really worse than any of the pain of the cancer or the treatments. When I woke up from the surgery, I really felt great, and over the next few days I had a very quick recovery.

“I was able to get back into my life quickly, and although I was still afraid of what was to come, I felt like I had the strength to fight. When I think about my patients with Ovarian cancer, I would like them to be able to come out of surgery feeling like they have the strength to fight, to take on the cancer. I can imagine that when you are recovering from a one of these big, open traditional staging procedures, you’re in excruciating pain, you really can’t move, and you like you’ve just been hit by a bus. I’m sure you don’t feel strong and ready to fight the cancer at that point. You might just feel like giving up. If my technique can help even a few patients avoid that feeling, then thats the most valuable thing in the world to me.

“That’s why I’m really passionate about what this new cutting edge technique can do for cancer patients, and I feel it can be just as valuable in the fight against cancer as the latest ‘big pharma’ wonder drug.”

How can I find out more details?

Please contact the Marchand OBGYN PR department at the below address.

View More Surgery and Neurotechnology News
"If we can use minimally invasive surgery to take some of the recovery time and complications out of cancer surgery, then I think we've really done a lot of good for patients fighting cancer," said Dr. Greg J. Marchand.

ABOUT THE NEWS SOURCE:
Marchand Institute for Minimally Invasive Surgery

Dr. Marchand is a board certified physician in Obstetrics and Gynecology and a recognized expert in minimally invasive surgery. Dr. Marchand completed training in Obstetrics and Gynecology at the University of Tennessee, and has publications in the fields of urogynecology and minimally invasive surgery. Dr. Marchand was also one half of the team that was recently recognized by the Guinness Book of World Records(TM) for removing a seven pound uterus without needing to cut open the patient. Dr. Marchand is one of the few OBGYN’s in Arizona to be COEMIG Certfied, (Center of Excellence in Minimally Invasive Gynecology).

LEGAL NOTICE AND TERMS OF USE: The content of the above press release was provided by the “news source” Marchand Institute for Minimally Invasive Surgery or authorized agency, who is solely responsible for its accuracy. Send2Press® is the originating wire service for this story and content is Copr. © Marchand Institute for Minimally Invasive Surgery with newswire version Copr. © 2017 Send2Press (a service of Neotrope). All trademarks acknowledged. Information is believed accurate, as provided by news source or authorized agency, however is not guaranteed, and you assume all risk for use of any information found herein/hereupon.