Send2Press › Wire › Health and Medical › Surgery and Neurotechnology › Dr. Marchand Awarded World Record for Hysterectomy through the Smallest Incision Ever

Dr. Marchand Awarded World Record for Hysterectomy through the Smallest Incision Ever

MESA, Ariz., Sept. 4, 2018 (SEND2PRESS NEWSWIRE) — The World Record Academy today Awarded Dr. Greg J. Marchand, of Marchand Institute for Minimally Invasive Surgery, a world record for performing hysterectomy through the smallest incision ever. The surgery involved removal of a uterus, ovaries and Fallopian tubes all through an incision the diameter of an AAA battery. The record was awarded after a lengthy verification process performed by the academy to verify the results. 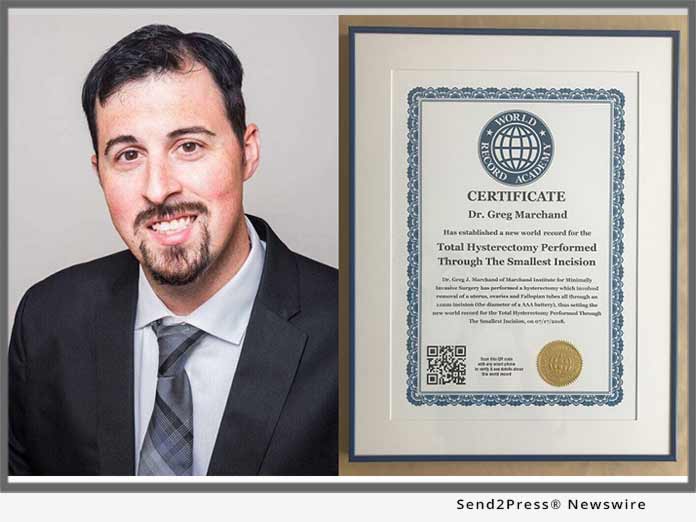 Dr. Marchand performed a hysterectomy through an 11mm incision at the bottom of the belly button using a technique called “laparoscopic single-port hysterectomy.” Although laparoscopic hysterectomy has been performed through a single incision before, this is believed to be the smallest incision that it has ever been performed through. The Academy reported that the Mayo Clinic and Cleveland Clinic had reported cases through a 15mm incision, which was believed to be the previous record.

The patient, Mary Coble, provided the Academy with pictures of her belly from 4 weeks after the surgery. There was no scar visible whatsoever. Ms. Coble had suffered from debilitating pelvic pain from endometriosis and adenomyosis for years before being recommended to have the hysterectomy after other conservative treatments for her pain were unsuccessful. She assumed she would be having the hysterectomy through the same incision that she had her cesarean section went through, which was a lower abdomen horizontal incision, often referred to as the “bikini cut.” She states she was surprised and delighted to find that the procedure was able to be performed through only a tiny incision in her umbilicus.

Dr. Greg Marchand, an Accredited Master Surgeon, developed this technique and led the surgical team that performed the surgery. The procedure was a modified version of a laparoscopic hysterectomy, where the only incision used is in the patient’s umbilicus. “A very novel part of our technique,” said Dr. Marchand, “is that because of the instrumentation we use, the incision is always going to be a reproducible 11 millimeters.”

“The recovery was really easy compared to my prior laparoscopic surgeries,” said Mary Coble following the procedure. Mary pointed out that she has no scars at all from the surgery, as the only tiny scar present is on the bottom of her belly button, where it is effectively invisible. Mary has previously had both laparoscopic surgery and delivered her baby by cesarean section, so she is no stranger to recovering from surgery.

“I think it’s a great advancement for minimally invasive surgery.” said Dr. Marchand, the lead surgeon. “When the incision shrinks from 15mm to 11mm, there are many benefits to the patient. There will be less postoperative pain, a quicker postoperative recovery, and a much lower chance of the incision causing a hernia later, which is a known complication of this type of surgery. My favorite part is that you can’t even see the incision on the patient.”

For media requests or more information, please contact Karen Thomas at Thomas PR at (631) 549-7575 or kthomas@thomaspr.com. Dr. Marchand is available for interview and Ms. Coble is also interested in sharing her story and interviewing for the purpose of raising awareness minimally invasive surgery and to help other women facing hysterectomy.

For more information on the “Master Surgeon” Accreditation, please see the website of the Surgical Review Corporation at http://www.surgicalreview.org/.

Description of Technical Procedure Performed: Successful Single-port Total Laparoscopic Hysterectomy (LESS) with bilateral salpingo-oophorectomy and lysis of adhesions secondary to scar tissue from a prior cesarean section. The procedure was performed using an Olympus Tri-Port device using a modified technique through a smaller incision. The incision and abdominal entry was performed using an Ethicon 11mm blunt tip trochar in order to be sure the incision was exactly 11mm, and that the procedure was reproducible. A 5mm 30 degree laparoscope was used with wavy graspers, a bovie laparoscopic extender “hook,” and a Covidien Ligasure Blunt Tipped 5mm device.

Method of Verification of Record: Direct video evidence of procedure and identifying information compared with final pathologic diagnosis by board certified pathologist. Patient consented to disclosure.

Can all hysterectomies be performed in this manner?

Our technique was successful in a difficult case that required dissection of scar tissue from a previous cesarean section, and also entailed scar tissue secondary to endometriosis. Unfortunately, some clinical scenarios involve worse pathology and may require a traditional laparoscopic or robotic assisted laparoscopic hysterectomy in order to be completed. We feel our technique is a valuable weapon in a surgeon’s set of surgical skills but does not constitute a solution for every patient requiring a hysterectomy.

How Would Women Benefit if more Hysterectomies Were Performed Using this Technique?

With LaparoEndoscopic Single Site procedures (LESS), there is only a small scar in the area of the belly button. Because there are less incisions, the healing process is much faster and there is much less postoperative pain. In many cases patients can leave the hospital the same day as the surgery. The cosmesis is also considerably improved, with essentially no visible scars whatsoever. From a surgical perspective, you have a very complete visualization of the abdominal cavity at time of surgery, which is a big advantage for dealing with complex pathology such as endometriosis and fibroids. As a result complications are less common.

What is the invented technique?

The Marchand Institute for Minimally Invasive Surgery acknowledges prior published techniques for single port hysterectomy, also called LESS hysterectomy. There are also suggested techniques for various commercial available products developed for these surgeries. We theorized and performed a surgical technique that utilizes many of the advantages of traditional LESS surgery with an entry that utilizes a bench-marked 11mm blunt laparoscopic trochar port. The end result is a reproducible surgical technique that will continually produce a small incision in the umbilicus of exactly 11mm that is created with a blunt trochar and extremely cosmetic while also providing excellent exposure to the abdomen.

What is the Marchand Institute for Minimally Invasive Surgery, and what do they do?

Did this record involve “morcellation”?

No. Total Laparoscopic Hysterectomy generally does not require morcellation except in extreme cases, such as Dr. Marchand’s 2008 Guinness World Record. For more details involving the 2008 World Record Please see: http://gregmarchandmd.com/guinness-record-marchand/

What do Dr. Marchand’s accreditations mean ?

The accreditations represent honors bestowed upon Dr. Marchand by different certifying organizations. They include:

Why is this a world record? Can’t a hysterectomy be done with no abdominal incision at all?

Yes, a hysterectomy can be performed vaginally without any abdominal incisions at all in uncomplicated cases without significant pathology. A completely vaginal approach, however, gives a very limited view of the abdomen and makes it difficult to deal with abdominal pathology such as scar tissue from prior surgeries and scar tissue from endometriosis. This can increase the chance of complications and injuries to surrounding organs. Using our technique we were able to directly visualize the abdominal cavity and perform the hysterectomy with less risk of complications. This was demonstrated by our ability to complete the hysterectomy safely despite this patient’s history of prior cesarean sections and endometriosis. Our technique also has excellent cosmesis using only an 11mm incision that leaves essentially no scar.

How can you be sure that this is the smallest incision a laparoscopic Hysterectomy has ever been performed through? What steps did you take to verify?

We performed extensive searches of the literature in all of the relevant journals as well as PubMed. We were not able to find any reported case of total hysterectomy performed solely through this small of an incision. The World Record Academy then went on to verify the claim independently. We were awarded the record after the completion of their exhaustive verification efforts.

For media requests or more information, please contact Karen Thomas at Thomas PR at (631) 549-7575 or kthomas@thomaspr.com. Dr. Marchand is available for interview and Ms. Coble is also interested in sharing her story and interviewing for the purpose of raising awareness minimally invasive surgery and to help other women facing hysterectomy.

For more information on the “Master Surgeon” Accreditation, please see the website of the Surgical Review Corporation at http://www.surgicalreview.org/.

ABOUT THE NEWS SOURCE:
Marchand Institute for Minimally Invasive Surgery

Dr. Marchand is a board certified physician in Obstetrics and Gynecology and a recognized expert in minimally invasive surgery. Dr. Marchand completed training in Obstetrics and Gynecology at the University of Tennessee, and has publications in the fields of urogynecology and minimally invasive surgery. Dr. Marchand was also one half of the team that was recently recognized by the Guinness Book of World Records(TM) for removing a seven pound uterus without needing to cut open the patient. Dr. Marchand is one of the few OBGYN’s in Arizona to be COEMIG Certfied, (Center of Excellence in Minimally Invasive Gynecology).

LEGAL NOTICE AND TERMS OF USE: The content of the above press release was provided by the “news source” Marchand Institute for Minimally Invasive Surgery or authorized agency, who is solely responsible for its accuracy. Send2Press® is the originating wire service for this story and content is Copr. © Marchand Institute for Minimally Invasive Surgery with newswire version Copr. © 2018 Send2Press (a service of Neotrope). All trademarks acknowledged. Information is believed accurate, as provided by news source or authorized agency, however is not guaranteed, and you assume all risk for use of any information found herein/hereupon.