LOS ANGELES, Calif., March 9, 2017 (SEND2PRESS NEWSWIRE) — Jonas Sills, founder and executive producer of Art-In-Relation (A.I.R.), announces a grand benefit performance of “Broadway-LA.” After three successful seasons of theater in the Long Beach area, Art-In-Relation made its move to Los Angeles with two acclaimed productions, “Andrew Lippa’s Wild Party” and “Frankenstein, A New Musical” in the fall of 2016. They were honored to receive rave reviews and an “Ovation Recommendation” from the LA Theater Alliance. 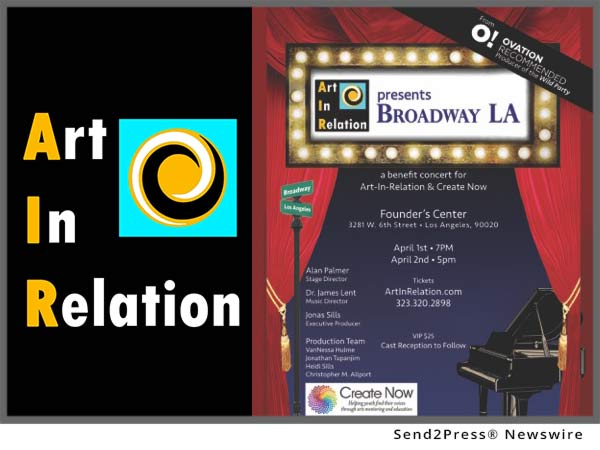 “Broadway-LA” is a performance of musical theater favorites in the arena style 1200 seat concert venue of the Founder’s Center for Positive Spirituality ( www.foundersla.org ). The event will be performed by a cast of 70 adults and youth as well as an instrumental combo. Mr Sills is thrilled with the evolution of this production as it combines veteran professionals with Broadway credits with up and coming artists, as well as developing youth.

“The auditions for this production included the most talented group of performers that we as a creative team have ever seen in the Los Angeles area, and I am so honored to have so many of them join us for this upbeat, exciting show,” says Sills.

The show will feature an exciting selection of Broadway musical selections from shows throughout the eras of the Broadway stage. A.I.R. aims to bring the polish, excitement and pizazz of a night at the theater in New York to Los Angeles audiences.

The production team includes Broadway and Off-Broadway veteran, Alan Palmer, as well as Dr. James Lent, professor of piano at UCLA and coach at American Musical Dramatic Academy. Joining us as publicist is VanNessa Hulme, while rounding out the team is Johnathan Tupanjim as stage manager, Christopher Allport, production support/design, and Heidi Sills as production assistant and box office.

Alan Palmer notes, “This performance is not the same everyday selections, but an evening of rarely heard Broadway musical gems.”

A.I.R. is keeping with its mission of presenting lesser known pieces, combined with family style entertainment.

Proudly becoming a sponsored non-profit, this performance is the perfect event to further Art-In-Relation’s goal of reaching out to the community, and working with charitable organizations. A portion of the proceeds will be given to Createnow.org, a charity which provides arts education, excursions, and enrichment to underprivileged and other youth and families around Los Angeles.

Art-In-Relation will be providing limited number of donation based tickets, as well as reasonably priced $25 VIP tickets which will include a reception with the cast, wine and hors d’ouvres.

Tickets are available on a first come first served basis by calling Heidi at 323-320-2898 or going to http://www.artinrelation.com or check us out on Facebook at https://www.facebook.com/artinrelation/.

LEGAL NOTICE AND TERMS OF USE: The content of the above press release was provided by the “news source” Art-In-Relation or authorized agency, who is solely responsible for its accuracy. Send2Press® is the originating wire service for this story and content is Copr. © Art-In-Relation with newswire version Copr. © 2017 Send2Press (a service of Neotrope). All trademarks acknowledged. Information is believed accurate, as provided by news source or authorized agency, however is not guaranteed, and you assume all risk for use of any information found herein/hereupon.