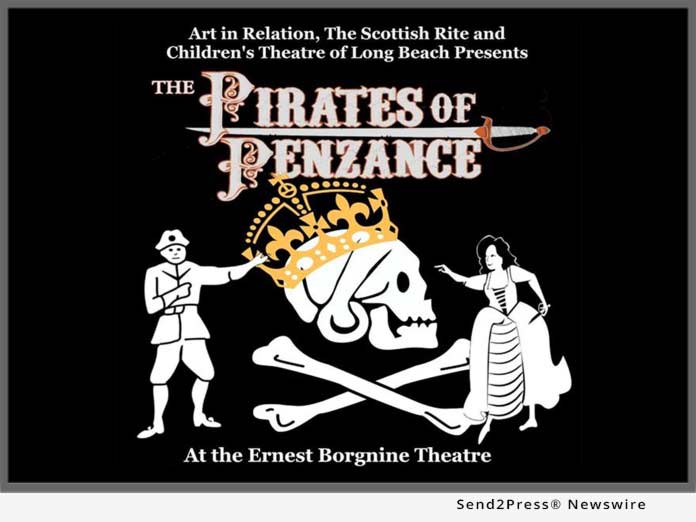 “The Pirates of Penzance” is directed by Jennifer Hammond, with musical direction by Jonas Sills and choreography by Cameron Shim. This trio have added their unique brand of silliness and satire to this classic, gathering a cast of 35 to tell the tale.

This marks the second time this talented crew has teamed up to bring Long beach family friendly theatre! Just last December they produced the popular “Christmas Carol”! Both companies founded in 2013, CTLB AND AIR found themselves on similar trajectories, producing musical theatre at the historic Ernest Borgnine theater in Long Beach, Calif.

Artists, producers and long-time friends, Jonas Sills (AIR) and Sean McMullen (CTLB) were reunited to produce this project, with the support of Tim Cable, manager of the historic Borgnine theatre.

“I am proud to be part of a partnership that is truly bringing excellent family friendly entertainment to Long Beach,” said Tim Cable. “It is my goal to bring Long Beach to the Borgnine (theatre) and put it on the map!”

Jennifer Hammond, the Director, sums up the plot: “Young Frederic leaves his apprenticeship to the Pirate King and meets and falls in love with the beautiful, yet whacky Mabel. You see, usually Mabel is usually played as an overly dramatic leading lady, but our Mabel is a cross between Lucille Ball and Sarah Jessica Parker a collision of glamour and comedy.” Hammond continued, “So, it followed that we should take a look at all our other leads and see them differently as well. Of course, madcap antics ensue and a very ‘happily ever after’ conclusion is in store for you.”

Since the 1870’s “The Pirates of Penzance” has been a favorite of musical theatre and light opera fans alike. Joseph Pap’s irreverent hit production in 1980 transferred from Central Park and ran years on Broadway receiving five Drama Desk Awards and three Tony Awards. It then travelled to London for a run of 601 performances and in 1983 was turned into a movie that inspired thousands of productions ever since.

Parodies of “I Am the Very Model of a Modern Major General,” the most famous G&S tongue-twisting fast-paced patter-song, have found their way into numerous movies and TV shows such as “Despicable Me 3” (the Minions song), “The Muppet Show,” “The Simpsons,” and many others.

Sean McMullen, President of CTLB and designer for this production, works in set design, costume design and is currently on faculty at the Orange County School for the Arts. McMullen, recipient of the Long Beach Hero Award, has a MFA in Theatre from CAL ARTS. The creation of CTLB, now in its fourth year, has been his lifelong dream.

McMullen explains, “This is our second Mainstage production in collaboration with Art in Relation and The Scottish Rite Event Center at the amazingly beautiful Ernest Borgnine Theatre. We are humbled and feel blessed to be part of this incredible collaboration!”

Jonas Sills, tenor, conductor and teacher who worked for 15 years as a public school music teacher for the Long Beach Unified School District at virtually every level with a focus on primary and middle school chorus. Sills has directed church choirs for the Unitarian and Methodist Churches and is the founder and artistic director for the Los Angeles Musical Theater Youth Chorus. In recent years he has been drawn to create his own art with his own production company, “Art-In-Relation,” producing fully staged and professional productions in Long Beach and Los Angeles.

“It is a joy to work with such talented performers who have the generosity of spirit to bring light opera to kids in such a hilarious way and still sing like pros! Not to mention the 10 piece orchestra comprised of professional and student musicians and getting to perform at this historic gem in the heart of Downtown Long Beach,” says Sills.

Children’s Theatre of Long Beach (CTLB) is a dynamic theatre company serving the Long Beach Community and its families with school age children. CTLB strives to teach, inspire and create experiences that will leave a lasting impression on our young actors and it is our hope that those experiences will inspire them in all aspects of their lives well beyond the stage.

Art-In-Relation (AIR) is the brainchild of Co-Producers Jonas and Heidi Sills. Mentored by Producer Emeritus and co-founder Ray Buffer, AIR takes its acronym name as a nod to the Hindu deity, Vayu who was known to give life through breath. With new co-producer Jon Peterson AIR hopes to breathe new life into musical theatre productions, concert music, choral presentations, plays as well as creating opportunities to experience healing arts. Their goal is to house all of these ideas under one roof.

Learn more about the Ernest Borgnine Theatre at:
http://www.ernestborgninetheatre.org/.

View More Performing Arts News
"It is a joy to work with such talented performers who have the generosity of spirit to bring light opera to kids in such a hilarious way and still sing like pros!" says Jonas Sills of AIR.

LEGAL NOTICE AND TERMS OF USE: The content of the above press release was provided by the “news source” Art-In-Relation or authorized agency, who is solely responsible for its accuracy. Send2Press® is the originating wire service for this story and content is Copr. © Art-In-Relation with newswire version Copr. © 2018 Send2Press (a service of Neotrope). All trademarks acknowledged. Information is believed accurate, as provided by news source or authorized agency, however is not guaranteed, and you assume all risk for use of any information found herein/hereupon.