PITTSBURG, Calif., Aug. 24, 2015 (SEND2PRESS NEWSWIRE) — USS-POSCO Industries (UPI), a large West Coast steel mill, has announced that it will be selling a variety of excess and disused MRO items through a second upcoming online auction. According to IAAS Worldwide who is presenting the auction, among the many items to be listed will be: large power transformers, bearings of all sizes and configurations, cylinders, a Alfa-Laval oil separator, a Durco pump, Midget King hoist parts, valves, gears, pipe and hose fittings, electrical parts, PLCs, PC Boards, and instrumentation.

The online auction will take place over a five-day period, beginning September 21, 2015 and continuing through September 25, 2015. It will be conducted on the BidSpotter.com website by IAAS Worldwide.

Alan Loeser, Director of IAAS Worldwide auction house says that there are many items for the company or person looking for electrical parts, gears, couplings, bearings, valves and gearboxes. Loeser says that interested buyers of these items can bid online real time through the auction site Bidspotter (www.bidspotter.com).

As always, IAAS Worldwide terms of payment include cash, credit card, company or personal check with a bank letter of guarantee, cashier’s check, or wire transfer. Organization and payment for removal of purchased items are fully the responsibility of the buyer. Visit www.iaasworldwide.com for complete terms of sale. There is a 16.5% buyer’s premium online.

UPI is a world-class manufacturer of flat rolled steel that produces more than one million tons of cold rolled, galvanized and tin coils annually. UPI’s Pittsburg, California facility has been producing steel for over 100 years and it currently maintains a workforce of approximately 750 people.

* Photo Caption: One of the many items in the September online auction held by IAAS Worldwide for USS-Posco. 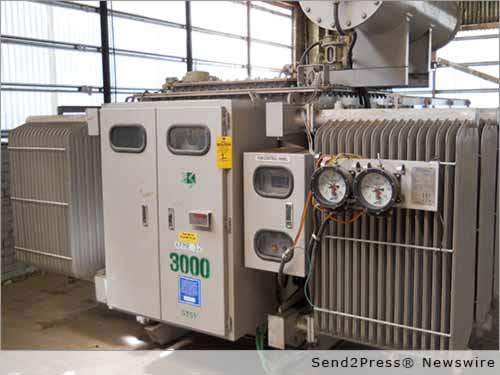 NEWS ARCHIVE NOTE: this archival news content, issued by the news source via Send2Press Newswire, was originally located in the Send2Press® 2004-2015 2.0 news platform and has been permanently converted/moved (and redirected) into our 3.0 platform. Also note the story “reads” counter (bottom of page) does not include any data prior to Oct. 30, 2016. This press release was originally published/issued: Mon, 24 Aug 2015 15:06:55 +0000

ABOUT THE NEWS SOURCE:
IAAS Worldwide

IAAS Worldwide staff members have been conducting various types of liquidations for decades. What makes our company different is the diversity of our liquidation capabilities, the techniques we have learned and our additional experience in the international placement of commercial assets. Our company maintains a global niche in the industry to find the appropriate marketplace, wherever in the world that may be, as well as a worldwide buyers list.

LEGAL NOTICE AND TERMS OF USE: The content of the above press release was provided by the “news source” IAAS Worldwide or authorized agency, who is solely responsible for its accuracy. Send2Press® is the originating wire service for this story and content is Copr. © IAAS Worldwide with newswire version Copr. © 2015 Send2Press (a service of Neotrope). All trademarks acknowledged. Information is believed accurate, as provided by news source or authorized agency, however is not guaranteed, and you assume all risk for use of any information found herein/hereupon.