According to Mocha Ochoa, Principal of The Oracle Group: "We are excited to expose inspiring cultural icons like Sister Souljah to highly underserved audiences who may not get the everyday opportunity to engage with Best Selling Authors."

WASHINGTON, D.C., June 11, 2013 (SEND2PRESS NEWSWIRE) — On June 14, 2013 New York Times Best Selling Author and Activist Sister Souljah will headline a Global Summer Reading Initiative discussing a highly anticipated follow up to her book “Coldest Winter Ever.” This new novel, “A Deeper Love Inside: The Porsche Santiaga Story” (Emily Bestler Books/Atria; ISBN: 978-1439165317) will be the central topic of discussion for young people across the globe, as they come together to discuss and encourage the importance of Summer Reading.

The presentation and book signing will be held at the ARC Theater in Washington, D.C. with an interactive real time broadcast to students in attendance at the United States Embassies in Soweto, South Africa, Harare Zimbabwe and Accra Ghana.

The Global Book Talk will begin at 9 a.m. with an interview conducted by event host Mocha Ochoa of The Oracle Group; a Q&A session with students in Washington, D.C., Soweto, Harare and Accra where these students will be afforded an opportunity to interact with the author and each other in real time. A book signing will immediately follow the book talk. This auspicious event is produced by The Oracle Group, an international literary event production company.

Sister Souljah is best known for her work as a political activist and educator of underclass urban youth. A graduate of Rutgers University, she is a beloved personality in her own community. She lives in New York with her husband and son.

The Global Book Talk with Sister Souljah event will take place during the end of the school year when families prepare for summer activities.

According to Mocha Ochoa, Principal of The Oracle Group: “We are excited to expose inspiring cultural icons like Sister Souljah to highly underserved audiences who may not get the everyday opportunity to engage with Best Selling Authors. Further, our intent is to also have student groups actively engage with each other through literary programming on a digital platform in which new and innovative ways encourage young people to continue an interest in literature during their time off from school.”

About The Oracle Group:
The Oracle Group, a nationally recognized agency which specializes in producing literary programming, connects authors with events to engage and uplift the local, national and global community. The Oracle Group hosts specialty Author Events, National and Community Book Fairs, Educator Appreciation Series and Literary Campaign Development. It also produces the literary talk show, In the Cafe with Mocha. The Oracle Group produces the Author Pavilion at the NAACP National Annual Convention; has served as the Special Advisor of Diversity Programming for the National Book Festival and is the project founder of the Reading Across Continents Initiative. 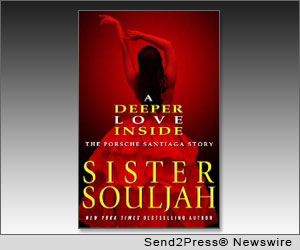 NEWS ARCHIVE NOTE: this archival news content, issued by the news source via Send2Press Newswire, was originally located in the Send2Press® 2004-2015 2.0 news platform and has been permanently converted/moved (and redirected) into our 3.0 platform. Also note the story “reads” counter (bottom of page) does not include any data prior to Oct. 30, 2016. This press release was originally published/issued: Tue, 11 Jun 2013 17:37:54 +0000

View More African American Interest News
According to Mocha Ochoa, Principal of The Oracle Group: "We are excited to expose inspiring cultural icons like Sister Souljah to highly underserved audiences who may not get the everyday opportunity to engage with Best Selling Authors."

LEGAL NOTICE AND TERMS OF USE: The content of the above press release was provided by the “news source” The Oracle Group International or authorized agency, who is solely responsible for its accuracy. Send2Press® is the originating wire service for this story and content is Copr. © The Oracle Group International with newswire version Copr. © 2013 Send2Press (a service of Neotrope). All trademarks acknowledged. Information is believed accurate, as provided by news source or authorized agency, however is not guaranteed, and you assume all risk for use of any information found herein/hereupon.