Considered by many to be the gem of the Gilbert & Sullivan canon, “The Mikado” is an irresistible concoction of rapturous melody, witty satire, and exotic locale, peopled with unforgettable characters. Tickets range in price from $28 to $100 and are available online at http://www.bht.org or by calling 866-811-4111. Payment in excess of $20 per ticket is tax-deductible to the extent provided by law.

The GO Project is committed to closing the achievement gap for families who have children struggling in New York City Public Schools. For 44 years, GO has provided essential academic and family support services to under-resourced, underperforming public school children in lower Manhattan.

The Blue Hill Troupe is currently accepting proposals for its charity partner for the 2014-2015 season. Visit http://bht.org/charityselect.php for further information.

“The Mikado” is directed by Gary Slavin, whose recent Off Broadway credits include “Show Choir! – The Musical” and the hit political revue “Bush Is Bad.” Musical direction is by Zachary Schwartzman, an assistant conductor with the American Symphony Orchestra.

Since 1924, the Blue Hill Troupe has produced a large-scale Gilbert & Sullivan operetta every spring, with lavish production values and full orchestra. Each year, the net proceeds benefit a different New York City charity, with the impressive total donated approaching $4 million. Prior charities include “I Have A Dream” Foundation(R) – New York Metro Area (2012), The Carter Burden Center for the Aging (2011), The New York Foundling (2010), and Inwood House (2009).

The all-volunteer Blue Hill Troupe has been featured on CBS Sunday Morning and with The New York Pops at Carnegie Hall. For fifteen years, they presented a concert in the Metropolitan Museum of Art’s Concerts and Lectures series, and they continue to concertize in venues around the city. 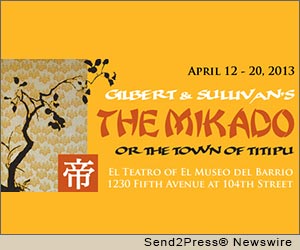 NEWS ARCHIVE NOTE: this archival news content, issued by the news source via Send2Press Newswire, was originally located in the Send2Press® 2004-2015 2.0 news platform and has been permanently converted/moved (and redirected) into our 3.0 platform. Also note the story “reads” counter (bottom of page) does not include any data prior to Oct. 30, 2016. This press release was originally published/issued: Wed, 23 Jan 2013 16:19:21 +0000

LEGAL NOTICE AND TERMS OF USE: The content of the above press release was provided by the “news source” Blue Hill Troupe or authorized agency, who is solely responsible for its accuracy. Send2Press® is the originating wire service for this story and content is Copr. © Blue Hill Troupe with newswire version Copr. © 2013 Send2Press (a service of Neotrope). All trademarks acknowledged. Information is believed accurate, as provided by news source or authorized agency, however is not guaranteed, and you assume all risk for use of any information found herein/hereupon.