Since its inception in 1924, the Blue Hill Troupe has produced a Gilbert & Sullivan operetta every spring with lavish production values and full orchestra, donating the net proceeds to a New York City charity. Over the years, the Blue Hill Troupe has donated an impressive total of $4 million. Prior charities include The GO Project, I Have a Dream Foundation-New York Metro, The Carter Burden Center for the Aging, The New York Foundling, and Inwood House.

“Ruddigore” is a delicious parody of Victorian melodrama, complete with a villain who carries off the village maiden; a hero in disguise; a snake-in-the-grass best friend; a madwoman out of the attic; and ghosts stepping down from their portraits to enforce a family curse. But in typical topsy-turvy fashion, Gilbert turns the moral absolutes of melodrama upside down, as good becomes bad, bad becomes good, and heroes take the easy way out.

Quality Services for the Autism Community (QSAC) helps children and adults with autism live meaningful and fulfilled lives in our society. The Blue Hill Troupe’s donation will support QSAC’s efforts to integrate augmentative communication and learning devices (e.g. tablets) in their educational programs for participants with autism. These tools will help their students to improve life and academic skills. Specifically, the use of a tablet helps our participants to improve communication and socialization deficits.

“Ruddigore” is directed by Gary Slavin, whose recent Off Broadway credits include “Show Choir! – The Musical” and the hit political revue “Bush Is Bad.” Musical direction is by Zachary Schwartzman, an assistant conductor with the American Symphony Orchestra.

In its 90-year history, the Blue Hill Troupe has produced the entire Gilbert & Sullivan canon, including the long-lost Thespis, with a new score by Grammy Award-winning composer and record producer Thomas Z. Shepard. In 2005, the Blue Hill Troupe was honored with three awards at the 12th Annual International Gilbert & Sullivan Festival in Buxton, UK, for its innovative production of the G&S rarity, “The Grand Duke.” The all-volunteer Blue Hill Troupe has been featured on CBS Sunday Morning and appeared with The New York Pops at Carnegie Hall. For fifteen years, they were a mainstay of the Metropolitan Museum of Art’s Concerts and Lectures series, and they continue to concertize in venues around the city. 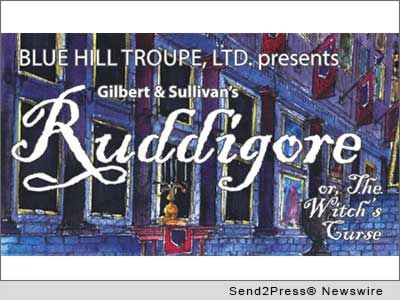 NEWS ARCHIVE NOTE: this archival news content, issued by the news source via Send2Press Newswire, was originally located in the Send2Press® 2004-2015 2.0 news platform and has been permanently converted/moved (and redirected) into our 3.0 platform. Also note the story “reads” counter (bottom of page) does not include any data prior to Oct. 30, 2016. This press release was originally published/issued: Mon, 03 Feb 2014 14:04:17 +0000

LEGAL NOTICE AND TERMS OF USE: The content of the above press release was provided by the “news source” Blue Hill Troupe or authorized agency, who is solely responsible for its accuracy. Send2Press® is the originating wire service for this story and content is Copr. © Blue Hill Troupe with newswire version Copr. © 2014 Send2Press (a service of Neotrope). All trademarks acknowledged. Information is believed accurate, as provided by news source or authorized agency, however is not guaranteed, and you assume all risk for use of any information found herein/hereupon.