NEW YORK, N.Y., Nov. 5, 2021 (SEND2PRESS NEWSWIRE) — Art collectors and chess lovers will soon have a chance to own high-quality depictions of historically important chess battles in the form of non-fungible tokens (NFTs) issued through Citrusw00d Productions. Citrusw00d has minted an initial pair of multimedia chess films on the OpenSea NFT marketplace that will list for sale on Saturday, Nov. 6, 2021. 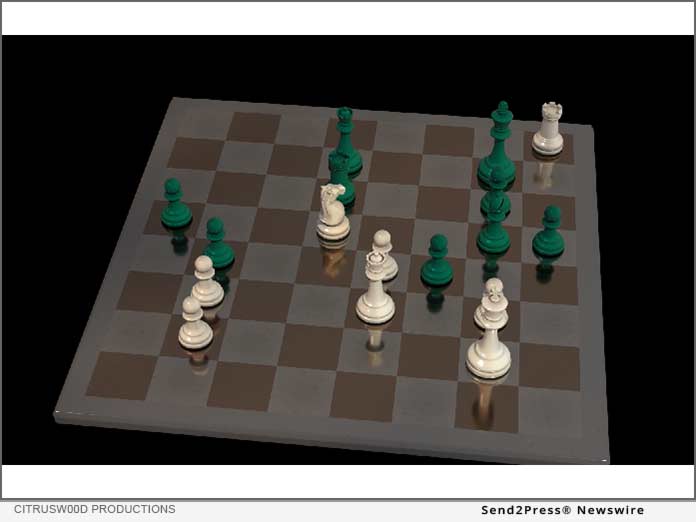 Each approximately two-minute-long film presents in striking visual detail a short sequence of moves that decided a historically important game, followed by a text vignette describing the context and the players. Designed for the general public and art collectors, the content contains no chess notation.

Each NFT will be produced in a pre-set number of editions, each carrying a unique digital certificate of authenticity recorded on the Ethereum blockchain. The films appear within an OpenSea collection named “Chess Board Rapture,” viewable at https://opensea.io/collection/chess-board-rapture.

Coming additions to the collection will build on the theme of honoring chess history by showcasing critical moves that decided important games of the distant and recent past.

The project is managed by Citrusw00d Productions, a start-up enterprise that is working with members of the chess community to develop curated experiences meant to deepen public appreciation of the aesthetic beauty and historic traditions of the Royal Game.

Chess games, moves, and players occupy a growing niche within the emerging digital art market. A further impetus for creation and trading of chess-inspired NFTs will arrive later in November when the first World Chess Championship match in three years gets under way in Dubai. NBC will cover the match for an hour each day on its specialized sports TV network, NBCSN.

Chess itself is enjoying an explosion in both participation and viewership, vaulting into the ranks of the world’s fastest-growing e-sports. The top playing site, Chess.com, hosts several million chess games daily. It claimed 74 million members as of October, up 40% year-to-date and up 150% since January 2020. A 2-week amateur chess tournament among gaming stars and celebrities this February drew 7.5 million viewers; a September sequel was sponsored by Coinbase, the cryptocurrency giant.

“This surging visibility has spawned a proliferation of chess brand names whose market influence extends far beyond the chess world,” says Coordie64, the chess playing visual artist behind the Chess Board Rapture NFT concept. “Nothing similar ever happened before — not even during the 1970s Bobby Fischer chess boom.”

Mastercard recently signed World Chess Champion Magnus Carlsen as a global brand ambassador — part of a select group that includes Lionel Messi and Naomi Osaka. Carlsen was the world’s highest-earning e-sports professional in 2020, while the Netflix chess drama The Queen’s Gambit was the year’s third most-watched TV series. Several e-sports organizations have ongoing sponsorship contracts with professional and amateur chess players whose Twitch streams have hundreds of thousands of followers each.

Unlike other e-sports, chess is widely recognized as an art form as well as a competitive struggle. It is not uncommon for chess tournaments to award “brilliancy prizes” for exceptional creativity at the board. Frank Marshall, an American champion of the early 20th century, once made a move of such beauty that spectators reportedly showered him with gold coins. Marcel Duchamp, a professional-level chess player and a world-class artist, famously declared that “all chess players are artists.”

For technical and other details of the Chess Board Rapture project and its people, please refer to the background fact sheet linked here (PDF): https://drive.google.com/file/d/1iTFs_QjKQ2dohqpXTTd1MMCAyfEWil-s/view?usp=sharing

Please note that the company name, Citrusw00d, is spelled with zeros (“0”) in place of the letter “o.”

ABOUT THE NEWS SOURCE:
Citrusw00d Productions

Citrusw00d Productions is in the business of production and distribution of multimedia content targeting specialized audiences, including collectors of chess art with historical significance.

LEGAL NOTICE AND TERMS OF USE: The content of the above press release was provided by the “news source” Citrusw00d Productions or authorized agency, who is solely responsible for its accuracy. Send2Press® is the originating wire service for this story and content is Copr. © Citrusw00d Productions with newswire version Copr. © 2021 Send2Press (a service of Neotrope). All trademarks acknowledged. Information is believed accurate, as provided by news source or authorized agency, however is not guaranteed, and you assume all risk for use of any information found herein/hereupon.