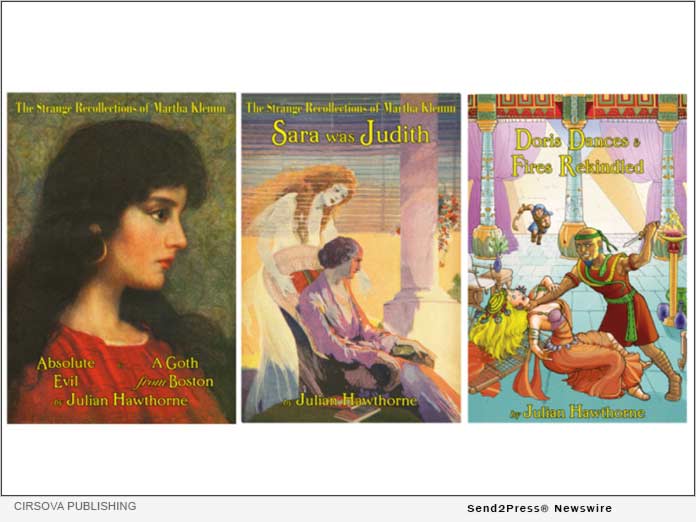 “The Strange Recollections of Martha Klemm” resurrects Hawthorne’s pulp heroine, a witty and modern woman with a touch of clairvoyance and descent from Salem witches, in two volumes, collecting Absolute Evil, A Goth From Boston, and Sara Was Judith. A third volume will collect the stand-alone romances, Doris Dances and Fires Rekindled.

These collected editions of Julian Hawthorne’s All-Story Weekly fiction will be released later in 2021.

Cirsova Publishing ( https://www.cirsova.wordpress.com ) has been publishing thrilling adventure science fiction and fantasy since 2016. They have published over 20 issues of their flagship publication, Cirsova Magazine. Additionally, they have published a number of anthologies, a fully illustrated edition of Leigh Brackett’s Planet Stories-era Stark adventures, Jim Breyfogle’s Mongoose and Meerkat, and the 35th Anniversary Editions of Michael Tierney’s Wild Stars.

Michael Tierney ( http://www.thewildstars.com ) is a pulp historian and archivist who has written extensively on Edgar Rice Burroughs, having created the massive four volume “Edgar Rice Burroughs 100 Year Art Chronology,” and is currently working on another Art Chronology about Robert E. Howard. He has been involved in the comic book industry for 40 years, owning two of the oldest comic book stores in Central Arkansas until switching to mail-order only in 2020. He is also an accomplished science fiction writer and artist, having worked on his Wild Stars saga since the 1970s. Michael not only made his pulp library available for this project, he provided the photographic images of these rare magazines so that a manuscript could be produced. He has also lent his years of experience digitally restoring damaged pulp art to restore the original covers.

Robert Allen Lupton ( https://www.facebook.com/people/Robert-Allen-Lupton/100022680383572 ) is a prolific author, pulp historian, and commercial hot air balloon pilot. He has published nearly 200 short stories across numerous anthologies, including the New York Times Best Selling Chicken Soup For the Soul series, and has published several anthologies and novels. His most recent novel, “Dejanna of the Double Star” was published in December 2020. Robert has been an active Edgar Rice Burroughs historian, researcher, and writer since the 1970s, including at ERBzine ( www.erbzine.com/lupton/ ), where several of his articles and stories are published. Robert has painstakingly recreated the texts as they were originally published from the digital images provided from Michael’s and his collection.

ABOUT THE NEWS SOURCE:
Cirsova Publishing

Cirsova Publishing has been publishing thrilling adventure science fiction and fantasy since 2016. They have published nearly 20 issues of their flagship publication, Cirsova Magazine. Additionally, they have published a number of anthologies, a fully illustrated edition of Leigh Brackett's Planet Stories-era Stark adventures, Jim Breyfogle's Mongoose and Meerkat, and the 35th Anniversary Editions of Michael Tierney's Wild Stars.

LEGAL NOTICE AND TERMS OF USE: The content of the above press release was provided by the “news source” Cirsova Publishing or authorized agency, who is solely responsible for its accuracy. Send2Press® is the originating wire service for this story and content is Copr. © Cirsova Publishing with newswire version Copr. © 2021 Send2Press (a service of Neotrope). All trademarks acknowledged. Information is believed accurate, as provided by news source or authorized agency, however is not guaranteed, and you assume all risk for use of any information found herein/hereupon.