"CARR is honored to be the County of San Diego's vendor entrusted with developing a fair rating system deserving the confidence of the public and providers," said Chris Murphy, CARR's Executive Director.

SAN DIEGO, Calif., May 5, 2015 (SEND2PRESS NEWSWIRE) — The County of San Diego, Aging & Independence Services awarded Consumer Advocates for RCFE Reform (CARR) a fixed price contract for a pilot project to create a rating system for the County’s assisted living facilities, and to develop a consumer-friendly website to display the ratings and facility information. The pilot program is a six-month effort with a current contact value of $50,000.

Demonstrating the Board of Supervisor’s commitment to providing a trusted information source about senior care for residents of San Diego County, the contract terms allow additional funding for up to 3 follow-on years.

This award results from a competitive procurement authorized by the County Board of Supervisors in December 2014. This contract is the first step in the initiative launched by Supervisors Dianne Jacob and Greg Cox in spring of 2014 to create a rating system for local assisted living facilities.

The rating system relies on voluntary participation by facilities. The UTSanDiego’s extensive expose of problems related to state oversight of assisted living facilities was the impetus for the Board’s initiative.

The goal of the County program, the first of its kind in California, is to help seniors and their families find a safe assisted living facility to provide necessary care and assistance.

“CARR is honored to be the County of San Diego’s vendor entrusted with developing a fair rating system deserving the confidence of the public and providers,” said Chris Murphy, CARR’s Executive Director. “We hope its introduction will raise the bar for all assisted living facilities operating in San Diego County, while providing consumers and allied professionals with an additional tool for making care placement decisions.”

Consumer Advocates for RCFE Reform (CARR) is a San Diego-based 501(c)3 not-for-profit organization specializing in public document research (http://www.rcfereform.org/) on assisted living facilities, and the state’s oversight of the industry. 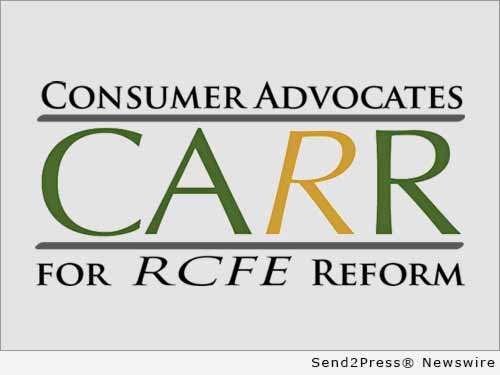 NEWS ARCHIVE NOTE: this archival news content, issued by the news source via Send2Press Newswire, was originally located in the Send2Press® 2004-2015 2.0 news platform and has been permanently converted/moved (and redirected) into our 3.0 platform. Also note the story “reads” counter (bottom of page) does not include any data prior to Oct. 30, 2016. This press release was originally published/issued: Tue, 05 May 2015 21:35:28 +0000

LEGAL NOTICE AND TERMS OF USE: The content of the above press release was provided by the “news source” Consumer Advocates for RCFE Reform or authorized agency, who is solely responsible for its accuracy. Send2Press® is the originating wire service for this story and content is Copr. © Consumer Advocates for RCFE Reform with newswire version Copr. © 2015 Send2Press (a service of Neotrope). All trademarks acknowledged. Information is believed accurate, as provided by news source or authorized agency, however is not guaranteed, and you assume all risk for use of any information found herein/hereupon.