POMPANO BEACH, Fla., Feb. 18, 2021 (SEND2PRESS NEWSWIRE) — Current Builders (www.currentbuilders.com) is preparing to break-ground on their latest project in Boca Raton. The 5201 Building is an eight-story structure with 284 units and an 827-space, six-level parking garage. The project’s development team is PG Mainstreet NCC 5201 Apartments, LLC, which is a collaboration between two seasoned South Florida developers comprised of Robert Mathias and father/ son duo Paul and Brian Kilgallon. 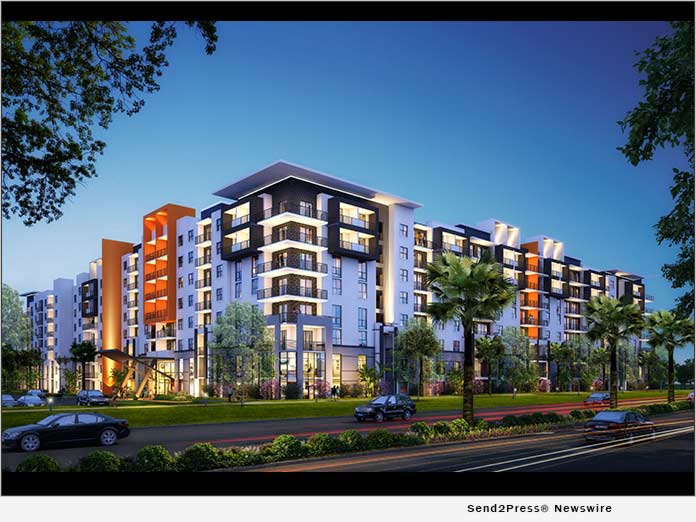 PHOTO CAPTION: Rendering of the 5201 Project.

The market rate rental is the seventh project Current Builders has collaborated on with Mainstreet Capital Partners and RLC Architects. Over the course of more than a decade, the three firms have partnered on projects of all sizes and scopes, crossing commercial and residential markets with a construction value of more than $100 million.

“We are looking forward to getting started on this exciting new project,” said Michael C. Taylor, CEO & President. “We are honored to once again be working with the outstanding team members at Mainstreet Capital Partners and RLC Architects. During the past ten years, we have developed a tremendous synergy with these industry leaders, and together we have created a comprehensive portfolio that has enhanced the South Florida landscape.”

This is Current Builders’ second project with Robert Mathias, President of New Century Companies; the firms partnered most recently on The Lumin, which was sold to Bell Partners Inc. for $56.5 million in fourth quarter 2020. Mathias is a seasoned developer in the South Florida region credited with more than $600 million of residential and commercial product including 4 West Las Olas, Cade, Caspian Delray, Franklin at Delray Beach, The Heritage Club Delray and Royal Poinciana Townhomes.

The 5201 Building will be located at The Park at Broken Sound, which was developed as a business park but has expanded to include multifamily housing. The amenity-rich 5201 project will include a large clubhouse, a fitness room, a yoga room, a business center, a pet grooming room and an interior courtyard with a pool.

Groundbreaking is scheduled for February 2021 with an estimated 18-month delivery schedule. The project team is being led by Ryan Kelley, Current Builders’ Partner and Vice President of Construction. Kelley will be joined by the same team that recently completed the Aura Boca project at the corner of Yamato Road and Congress Avenue; directly east of the 5201 project.

View More Building Projects News
"We are looking forward to getting started on this exciting new project," said Michael C. Taylor, CEO & President. "We are honored to once again be working with the outstanding team members at Mainstreet Capital Partners and RLC Architects."

ABOUT THE NEWS SOURCE:
Current Builders

Established in 1972, the award-winning Current Builders (CB) is a full-service general contractor with construction volumes of over $150 million annually. Credited with more than 40,000 residential units, 15 million square feet of office/industrial space and 250,000 square feet of retail space, CB's project portfolio features all building types. Licensed in Florida, Texas, North Carolina, South Carolina, Mississippi and Georgia, we are mobile and prepared to deliver for our clients throughout the southeast and Texas.

LEGAL NOTICE AND TERMS OF USE: The content of the above press release was provided by the “news source” Current Builders or authorized agency, who is solely responsible for its accuracy. Send2Press® is the originating wire service for this story and content is Copr. © Current Builders with newswire version Copr. © 2021 Send2Press (a service of Neotrope). All trademarks acknowledged. Information is believed accurate, as provided by news source or authorized agency, however is not guaranteed, and you assume all risk for use of any information found herein/hereupon.