NEW YORK CITY, N.Y., Feb. 29, 2016 (SEND2PRESS NEWSWIRE) — DearMob’s 5KPlayer makes a quantum leap into Version 3.6 for Windows and Mac upon the announcement of Oscars 2016 winners, offering an ideal choice for users to watch Oscars 2016 best pictures including “Spotlight,” “The Revenant” and more with the free video player. For refined video quality, this upgrade involves major improvements in playing encrypted online videos and AirPlay to Apple tvOS 9.2 released on Feb. 23, the previous bug of playing videos without sound also gets addressed on both Windows and Mac.

To bring the best pictures in the 88th Academy Awards to each audience, 5KPlayer fixed two problems with online watching and video downloading (when legitimate), so that anyone can use it to watch “Spotlight,” “The Revenant,” and “Mad Max: Fury Road” with non-faulty soundtracks, original subtitles, and no video choke or mosaic. Another homegrown option of 5KPlayer called AirPlay also sees a fine-tune in conjunction with the latest Apple tvOS 9.2 upgrade, which can present movies from PC (Windows 10 compatible) or Mac to Apple TV.

Nominated Oscar pictures are out of theaters before the voting procedure begins, according to www.oscars.org. Thus users can resort to other channels such as 5KPlayer for a legal copy. The online download module is adjusted so as to analyze and download streaming videos from legal sites. In front of Oscars 2016 movies with world-class visual effects and screenplay, 5KPlayer Version 3.6 for Windows and Mac comes just in time.

The brand new AirPlay kernel of 5KPlayer supports any Oscars 2016 movies for AirPlay from PC to Apple TV for bigger-screen enjoyment. Apple buffs can now upgrade to the latest Apple tvOS 9.2 with 5KPlayer working deftly. Despite dozens of 3rd party AirPlay servers squashed by AirPlay in iOS 9.0 or newer, 5KPlayer is a resilient candidate to catch up with the latest Apple updates.

Upholding the principle of supplying creative multi-media solutions, 5KPlayer’s in-time leap into Version 3.6 for Mac and Windows fully testified its consideration for users amid the annual grand event for pictures. Watching best pictures of the Oscars 2016 with 5KPlayer, the audiences can see how a real free video player can work wonders with world-class movies and cinematography.

Pricing and Availability:
5KPlayer is totally free and clean. Now the Version 3.6 for Windows and Mac are available for download at http://www.5kplayer.com/. 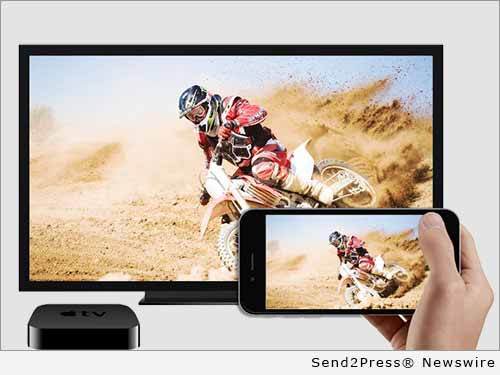 Alternate Headline: DearMob releases 5KPlayer Version 3.6 for Windows and Mac upon announcement of the Oscars 2016 winners

NEWS ARCHIVE NOTE: this archival news content, issued by the news source via Send2Press Newswire, was originally located in the Send2Press® 2004-2015 2.0 news platform and has been permanently converted/moved (and redirected) into our 3.0 platform. Also note the story “reads” counter (bottom of page) does not include any data prior to Oct. 30, 2016. This press release was originally published/issued: Mon, 29 Feb 2016 14:55:17 +0000

ABOUT THE NEWS SOURCE:
DearMob Inc.

DearMob, Inc., a vigorous software company with a forward-looking vision, keeps pushing itself in developing new products and revamping 5KPlayer's capability. With a foothold in mobile solutions, media playback, online video download, and AirPlay in 2016, DearMob is ready to enable more dynamic growth with compact and competitive products to Mac/Windows/iOS/Android users in the year 2017.

LEGAL NOTICE AND TERMS OF USE: The content of the above press release was provided by the “news source” DearMob Inc. or authorized agency, who is solely responsible for its accuracy. Send2Press® is the originating wire service for this story and content is Copr. © DearMob Inc. with newswire version Copr. © 2016 Send2Press (a service of Neotrope). All trademarks acknowledged. Information is believed accurate, as provided by news source or authorized agency, however is not guaranteed, and you assume all risk for use of any information found herein/hereupon.