NEW YORK CITY, N.Y., April. 15, 2016 (SEND2PRESS NEWSWIRE) — DearMob rolls out a multimedia software all-in-one pack from April 14 to May 3, alongside software gifts for Mac users, reaching the highest discount ever! This pack containing a best-in-class DVD ripper, a video converter, and a backup software is shipped by DearMob, the integrated multimedia software manufacturer after MTV Movie Awards 2016, supplying a downright affordable solution for movie buffs to rip DVDs, convert videos and watch movies chosen by the MTV Movie Awards 2016 committees from the comfort of home.

Video player, DVD ripper, and video converter at your toolkit should go head-to-head with the star-studded MTV Movie Awards 2016 winners. With positive feedback from users of the DVD ripper and video converter from Windows 10/8/7 and Mac OS reporting their tried-and-true utility, it is high time that customers nab the DVD video software pack to get plenty hours of fun watching top award winners, as well as 1:1 backup the DVDs videos, or change video format to watch on iPhone and iPad.

To bring the refined screenplay, special effects and list-topping visual performance of MTV Movie Awards 2016 winner movies to your devices, the discount will extend to May 3, 2016.

DearMob continues to focus on effective cooperation with best-in-class dynamic multimedia software. With MTV Movie Awards 2016 sorting out another list of top-quality movies worth reviewing, this video software pack comes just in time to tackle DVD ripping, Video conversion to iPhone, iPad and non-stop 4K and 8K video playback to the highest standard. 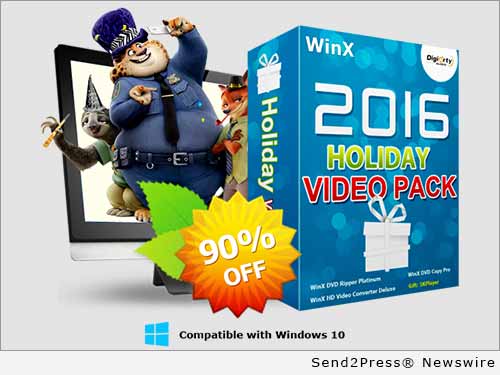 NEWS ARCHIVE NOTE: this archival news content, issued by the news source via Send2Press Newswire, was originally located in the Send2Press® 2004-2015 2.0 news platform and has been permanently converted/moved (and redirected) into our 3.0 platform. Also note the story “reads” counter (bottom of page) does not include any data prior to Oct. 30, 2016. This press release was originally published/issued: Fri, 15 Apr 2016 07:00:08 +0000

ABOUT THE NEWS SOURCE:
DearMob Inc.

DearMob, Inc., a vigorous software company with a forward-looking vision, keeps pushing itself in developing new products and revamping 5KPlayer's capability. With a foothold in mobile solutions, media playback, online video download, and AirPlay in 2016, DearMob is ready to enable more dynamic growth with compact and competitive products to Mac/Windows/iOS/Android users in the year 2017.

LEGAL NOTICE AND TERMS OF USE: The content of the above press release was provided by the “news source” DearMob Inc. or authorized agency, who is solely responsible for its accuracy. Send2Press® is the originating wire service for this story and content is Copr. © DearMob Inc. with newswire version Copr. © 2016 Send2Press (a service of Neotrope). All trademarks acknowledged. Information is believed accurate, as provided by news source or authorized agency, however is not guaranteed, and you assume all risk for use of any information found herein/hereupon.