Also it is worth highlighting that this all-in-one HD video converter will be given away officially for the last time in 2015 at Thanksgiving. For more details, check out this page http://www.winxdvd.com/giveaway/index.htm.

Quick Sync Video (QSV) hardware encoding and decoding technology was firstly integrated into Intel’s 2nd processor Sandy Bridge and has been honed well in the follow-up models Ivy Bridge, Haswell, Broadwell and Skylake, while NVIDIA’s CUDA and NVENC was created and applied in Kepler/Maxwell-based GPUs for the same purpose. Technically, WinX HD Video Converter Deluxe enables multiple CPU cores to simultaneously use QSV and CUDA/NVENC to encode and decode videos. Video conversion does ramp up more quickly by having hardware encoder accessible.

In particular, using GPU to encode HD videos can unburden the CPU to make game or web browsing run smoothly. To be precise, converting speed varies based on CPU/GPU types. So far the codecs that have been confirmed to be supported include H.264/MPEG-4 AVC and H.265 (HEVC) for HD videos, H.262/MPEG-2 Part 2 and VP8.

And along with this main update of hardware encoding, WinX HD Video Converter Deluxe is refined on stability, compatibility and online video download module. Learn more about this software at http://www.winxdvd.com/hd-video-converter-deluxe/.

“Launching Thanksgiving giveaway has become our company’s tradition. Every year we pick out a best-selling product as a thanksgiving gift and no exception this year. We choose the newly refreshed HD Video Converter, to help convert Thanksgiving videos or movies, free download Thanksgiving videos, movies or songs online, and so on,” said Angie Tung, Marketing Manager of Digiarty.

Any visitor is entitled to get WinX HD Video Converter Deluxe latest version 5.9.0 from Digiarty Thanksgiving Giveaway for free before Dec. 4, 2015. Plus, the full version is marked down from $49.95 to $19.95 as a special Thanksgiving offer. Unlike the giveaway version, the full version supports for free tech support and lifetime upgrade. 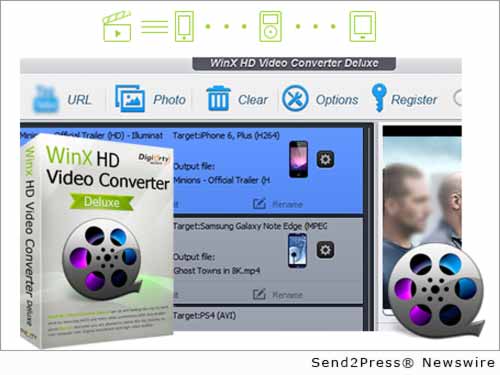 NEWS ARCHIVE NOTE: this archival news content, issued by the news source via Send2Press Newswire, was originally located in the Send2Press® 2004-2015 2.0 news platform and has been permanently converted/moved (and redirected) into our 3.0 platform. Also note the story “reads” counter (bottom of page) does not include any data prior to Oct. 30, 2016. This press release was originally published/issued: Fri, 20 Nov 2015 07:00:49 +0000

LEGAL NOTICE AND TERMS OF USE: The content of the above press release was provided by the “news source” Digiarty Software Inc. or authorized agency, who is solely responsible for its accuracy. Send2Press® is the originating wire service for this story and content is Copr. © Digiarty Software Inc. with newswire version Copr. © 2015 Send2Press (a service of Neotrope). All trademarks acknowledged. Information is believed accurate, as provided by news source or authorized agency, however is not guaranteed, and you assume all risk for use of any information found herein/hereupon.