Send2Press › Wire › General Editorial › Due to the Gilroy Tragedy, the Historic Meeting with Calif. Gov. Newsom and 100-year-old WWII Vet Sidney Walton Occurred at the Capitol Monday, Immediately after the Governor Returned from Gilroy

Due to the Gilroy Tragedy, the Historic Meeting with Calif. Gov. Newsom and 100-year-old WWII Vet Sidney Walton Occurred at the Capitol Monday, Immediately after the Governor Returned from Gilroy

SACRAMENTO, Calif., July 30, 2019 (SEND2PRESS NEWSWIRE) — Sidney Walton, age 100, one of America’s oldest WWII veterans and just back from on-stage in Normandy, met with Gov. Gavin Newsom July 29, 4:30 to 5 p.m. in the Governor’s office. The meeting was arranged by state Senator Brian Jones from San Diego County. 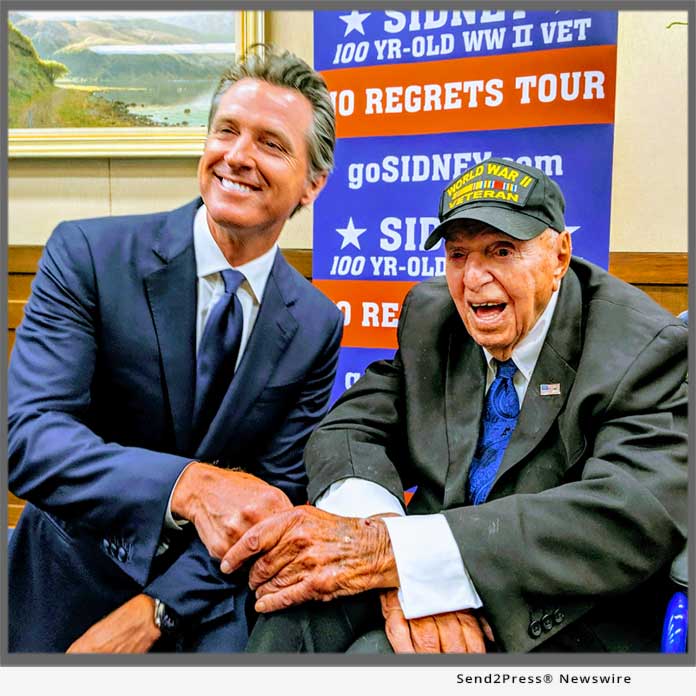 Although the meeting was closed to the press, videos and photos are now available on Sidney’s website at: http://www.gosidney.com/.

“This meeting with the governor of my home state was very special to me,” said Sidney.

Added his son Paul: “We were honored that he still made time to meet with Dad, a WWII veteran, upon returning to the Capitol from the tragic event in Gilroy.”

Sidney is on a first-ever, nationwide No Regrets Tour (http://www.nationalnoregretstour.com/) raising awareness of the diminishing number of WWII veterans and the sacrifices they made. He is meeting all 50 governors in all 50 states, and met with the President in the Oval Office on April 11. On June 6, Sidney was on-stage with Presidents Trump and Macron at the 75th anniversary of D-Day in Normandy.

As he travels constantly throughout the U.S., at every stop along the way his most frequent expression is, “I love this country!” His continued love and patriotism for America is the driving force behind his unique mission.

Born February 11, 1919 in New York City, Sidney joined the Army in March 1941 – nine months before Pearl Harbor – and served for the entire war. As a survivor of the Asian conflict in WWII, Sidney is reminding Americans of the sacrifices these brave men and women made for our freedom today. In a few short years, there will be no WWII veterans left.

Sidney’s biggest regret in life is missing a historic moment to meet some of the last Civil War veterans. Now, to make up for it, the No Regrets Tour is giving American citizens a rare opportunity to meet one of the last surviving WWII veterans.

“In these times when the country has become so divisive, my father represents a vanishing breed that unites both Democrats and Republicans alike. Everyone thanks him for his service in helping to save this beautiful country,” said his son Paul Walton. “It brings tears to my eyes to see him treated like a national treasure.”

A position with the federal government brought Sidney and his wife Rena to San Diego in 1960, where they raised three children, Paul, Judy and Ellie. Sidney has remained a widower since Rena’s death from cancer in 1982. At age 99, he reminded Paul of his lifetime regret not meeting Civil War veterans. That initiated the National No Regrets Tour. The two-year tour is almost half-way completed.

A GoFundMe link has been set up on Sidney’s webpage, http://www.gosidney.com/.

Gov. Newsom was the 23rd governor to greet Sidney:

*VIDEO of meeting with Sidney and Newsom (YouTube): https://youtu.be/ITBcwgVAKaI

View More General Editorial News
"This meeting with the governor of my home state was very special to me," said Sidney.

ABOUT THE NEWS SOURCE:
Sidney Walton

The No Regrets Tour is offering every American an opportunity to meet one of the few remaining WWII veterans. Sidney Walton, who just turned 100 and is now one of America's oldest WWII vets, was born Feb 11, 1919 in NYC. He joined the Army in 1941, nine months before Pearl Harbor, to fight Hitler and rescue Europe. Little did he know in less than a year he'd be fighting to save the U.S. He served in the 34th infantry, 8th division, where he rose to the rank of corporal. He returned to New York City in 1946, after completing five years of service. He hopes that WWII, the most horrific war ever fought in the history of the planet, is the last world war.

LEGAL NOTICE AND TERMS OF USE: The content of the above press release was provided by the “news source” Sidney Walton or authorized agency, who is solely responsible for its accuracy. Send2Press® is the originating wire service for this story and content is Copr. © Sidney Walton with newswire version Copr. © 2019 Send2Press (a service of Neotrope). All trademarks acknowledged. Information is believed accurate, as provided by news source or authorized agency, however is not guaranteed, and you assume all risk for use of any information found herein/hereupon.