NEW YORK, N.Y., July 28, 2017 (SEND2PRESS NEWSWIRE) — EaseUS announces a major update on CleanGenius for Mac that helps Mac users to clean up junk or large useless files in only a few clicks and run a MacBook or iMac faster with high performance. The new 5.0 version of its Mac optimizing tool tunes up latest macOS Sierra or previous Mac OS X effectively with many built-in features for better performance. 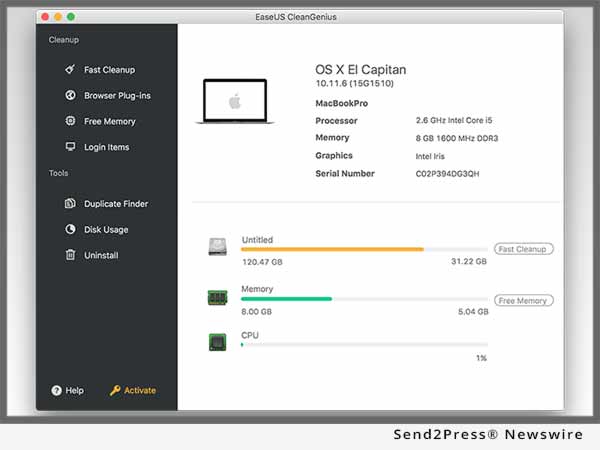 EaseUS CleanGenius for Mac, a smart Mac cleaner, clears junk files like system caches, user caches, system logs, user logs, downloads or trash away from Mac hard drive and free up much disk space for what accounts. After launching, information about the Mac machine is fully displayed including the distribution of memory, processor and the status of CPU.

Meanwhile, it starts to clean up web browsers’ plug-ins, extensions, cookies and caches from Safari, Google Chrome and Firefox. However, the bookmarks and browsing history would not be removed.

To maintain Mac with high performance, fair usage of internal memory makes sense. A common operation on Mac is to add more large files to the home folder until the warnings that it’s out of space. In unlucky cases, that always causes bootable failure. To leave enough storage space for normal system running, EaseUS CleanGenius for Mac can free up RAM that applications are occupied and slowing down Mac.

On the other side, Mac is usually cluttered with files and applications at startup. Managing startup apps makes Mac fast to boot up. This Mac optimizing utility can keep control on a list of login items whether are opened or not at the launch.

EaseUS Mac cleaner also can easily find duplicate files or identical copies that slow down Mac exactly and save much space to improve the processing speed. At the same time, it solves low disk problems and makes sure disk space well-organized.

Of course, this Mac optimizing tool shows clearly disk usage on HDD or SSD and keeps monitoring on how much space is occupied in real time. When the hard drive runs out of space, it will automatically alert of such risks to rearrange.

To empty out much disk space, uninstalling useless applications is a good practice to make Mac clean and speed up operations on Mac. The uninstaller feature in the Mac cleanup and optimizing software can remove apps into Trash along with caches, logs and preference thoroughly. By a series of Mac cleanup features, EaseUS CleanGenius speeds up Mac running with high performance and gets the most out of Mac machines no matter for work or daily life.

EaseUS CleanGenius for Mac is available now at: https://www.easeus.com/system-utilities/mac.htm

EaseUS provides professional IT solutions for home, education and SMB users, service providers in data recovery, backup, system optimization and partition manager on both Windows and Mac platforms. Founded in 2004, EaseUS has established itself as a fast-growing international company with over 100,000,000 wonderful users in the world. For more information, please visit https://www.easeus.com/.

LEGAL NOTICE AND TERMS OF USE: The content of the above press release was provided by the “news source” EaseUS Software or authorized agency, who is solely responsible for its accuracy. Send2Press® is the originating wire service for this story and content is Copr. © EaseUS Software with newswire version Copr. © 2017 Send2Press (a service of Neotrope). All trademarks acknowledged. Information is believed accurate, as provided by news source or authorized agency, however is not guaranteed, and you assume all risk for use of any information found herein/hereupon.