EaseUS MobiSaver for Android 4.5, a professional Android data recovery solution, is designed to work together with a bunch of new features and updates of Android 5.0/5.1/6.0 especially on the Windows 10 based platform by simple and direct user interface. MobiSaver for Android 4.5 securely recovers contacts, text messages, photos, videos, audio or documents from accidental deletion, operating system corruption during software updates or new ROM flashing, formatting, rooting, virus attacks and other data loss situations.

Android “rooting” is a means to unlock hidden features of the Android operating system. However, benefits and risks always go together. For attaining privileged control over various Android subsystems, it allows Android users to speed up phone, boost battery life, guard privacy, access root-only apps and enjoy customized features — but also it’s risky to cause data loss in the process. MobiSaver for Android 4.5 gives an access to scan rooted devices to restore lost files in a safe way.

A broad variety of Android devices can be automatically identified when connected to PCs and laptops where MobiSaver for Android 4.5 is installed at a fleeting speed. It may take a few minutes to breeze through all retrievable files on smartphones running Android OS.

This Android data recovery program scans devices including the popular Samsung S6, Google Nexus 6 and Nexus 6P for deleted data by few steps. After all the files are located and listed, it’s quite flexible to preview all files one-by-one to retrieve what matters most.

Regularly backing up data on Android phones can help in case of data loss and play an important part in the future direct recovery progress. EaseUS data recovery for Android phones is a life saver for any data loss disaster.

“EaseUS” is registered trademark of CHENGDU Yiwo Tech Development Co., Ltd. The Android trademark is the property of Google Inc.

—-
Updated: 2.18.16 to remove mention of ‘call history’ and ‘WhatsApp support’ from feature listing and ‘SD card’ recovery in 5th paragraph. 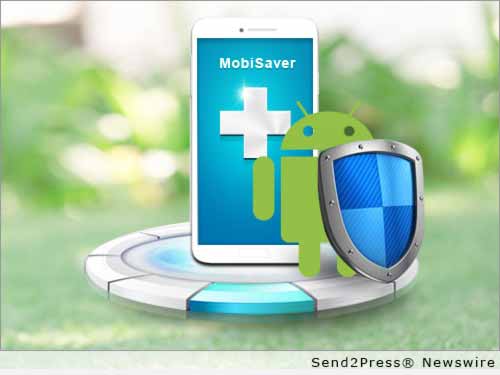 NEWS ARCHIVE NOTE: this archival news content, issued by the news source via Send2Press Newswire, was originally located in the Send2Press® 2004-2015 2.0 news platform and has been permanently converted/moved (and redirected) into our 3.0 platform. Also note the story “reads” counter (bottom of page) does not include any data prior to Oct. 30, 2016. This press release was originally published/issued: Wed, 17 Feb 2016 18:49:36 +0000