Top award-winning partition manager software, Partition Master maximizes hard drive usage through a stream of operations, such as resizing, merging, creating, deletion and splitting disk partition when there is not much room for a mass of data or applications. Information increasingly expands in the digital world so that large storage space is required for safekeeping. Efficient disk management contributes to data security and premium PC performance.

Meanwhile, EaseUS partition managing software allows users to keep track of large files that takes most memory space for further transferring or sorting. Unused data can be wiped out to save much space. Besides, disk defragmentation, it repairs file fragments and improves hard drive capability.

EaseUS redesigns the 11.0 partition managing software user interface to simplify routine disk management. Highlighted core features in common use are obvious to make sure to take all obstacles away from partition management. 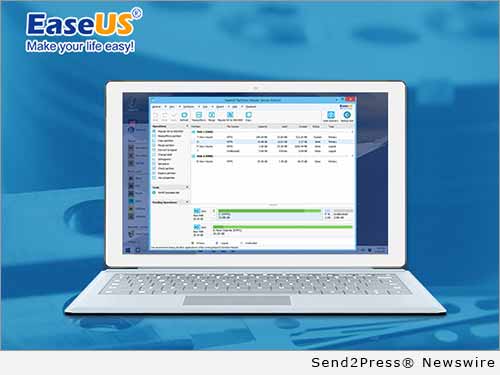 NEWS ARCHIVE NOTE: this archival news content, issued by the news source via Send2Press Newswire, was originally located in the Send2Press® 2004-2015 2.0 news platform and has been permanently converted/moved (and redirected) into our 3.0 platform. Also note the story “reads” counter (bottom of page) does not include any data prior to Oct. 30, 2016. This press release was originally published/issued: Thu, 28 Apr 2016 12:30:32 +0000