EaseUS Software, an international leader in data backup and recovery solution, has found that command lines, typically the case with operating system command shells have been used as a common means of interaction with a computer program. EaseUS Todo Backup 8.8 version, extends the traditional robust features, now making it possible to complete disk/partition and system backup in a convenient way for the exploding commercial usage audience. Scheduled backup is effectively fulfilled by issuing commands to relative programs in the form of successive lines of text. Operation by few lines seems to be easy, direct and simple mainly for IT professionals or administrators.

Succeeding the concise style of interface of 8.6 edition, the default naming rule of backup tasks and images is optimized in this 8.8 version for users’ prompt understanding and recognition of backup plans. The user-friendly usability of the new released backup software is in favor of easy execution of backup policies and data security with little time consumed. All tasks shown in the name, time, backup type, such as full, incremental, differential & schedule backup, and version are listed in a row for ease of use to find and check status in the backup process. Meanwhile, the limitation of prerequisite administrator privilege has been modified to allow users of ordinary permission to examine all backups without interruption of entire workflow.

Information communication through email including Outlook email service in particular, a free personal and productive connect way, has been a usual and pervasive practice in view of the cost and efficiency. In general, backing up information or data delivered by emails is a necessary routine for most business with regard to data protection and safety. EaseUS backup software 8.8 version takes the lead in the support of Microsoft Outlook 2016 mail to get rid of risks of data loss. 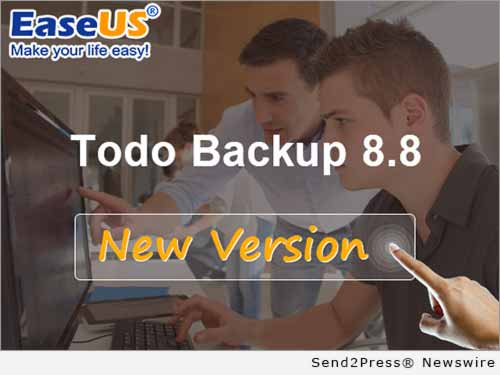 NEWS ARCHIVE NOTE: this archival news content, issued by the news source via Send2Press Newswire, was originally located in the Send2Press® 2004-2015 2.0 news platform and has been permanently converted/moved (and redirected) into our 3.0 platform. Also note the story “reads” counter (bottom of page) does not include any data prior to Oct. 30, 2016. This press release was originally published/issued: Thu, 15 Oct 2015 15:26:49 +0000