EaseUS, a professional leader in data backup and recovery field, designs EverySync 3.0 mainly for mass of users working on a project from multiple locations. File synchronization is a process of ensuring that files in several locations are updated via certain rules through different storage media. As an access to avoid troubles of manually saving, overwriting and replacing files on different external storage device, EverySync 3.0 version conducts one-way, and bidirectional file syncs with a minimum hassle of data corruption. In the 3.0 project, file sync mode, time and even frequency can be set up on schedule for premium performance in simple steps and convenience in the unique UI design.

Besides, the Windows 10 ready 3.0 edition allows to synchronize task status in the Windows Explorer that suits most users’ needs to track changes to the whole file sync and backup process in real-time and make prompt adjustment when it comes to unexpected occasions, for example, computer crushes. EaseUS has renewed the OneDrive SDK for large files uploading and solid support of cloud synchronization that users get used to accessing and sharing files.

In addition, EaseUS EverySync 3.0 version also assumes Google Drive and Dropbox file sync. Real time file transmitting over a FTP-based server is a means to synchronously transfer files or folders from one host to another. Free 30 days trial is available for users to take primary file syncing experience. 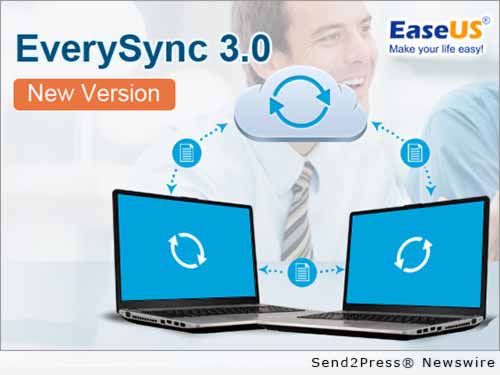 NEWS ARCHIVE NOTE: this archival news content, issued by the news source via Send2Press Newswire, was originally located in the Send2Press® 2004-2015 2.0 news platform and has been permanently converted/moved (and redirected) into our 3.0 platform. Also note the story “reads” counter (bottom of page) does not include any data prior to Oct. 30, 2016. This press release was originally published/issued: Tue, 20 Oct 2015 17:45:03 +0000