"This backup solution is ideal for small and medium-sized business. When disaster happens, you can restore all the critical data to avoid expensive downtime, and get back to work soon," says Wan Jianhua, General Manager of EaseUS Software.

Key features added in version 7.0 – Smart Backup and New User Interface:
“Smart Backup” is the automatic backup function which would automatically backup files once it detects the selected files is edited or updated. The feature should be able to protect your crucial data at any time. EaseUS’s interaction designers took the largest amount of the time to re-design the UI. With the newly designed and wizard-style interface, EaseUS Todo Backup becomes simpler to operate.

The other features of EaseUS Todo Backup 7.0:
* Automatically update, it is available to automatically update to the latest version without downloading and installing again.
* Fix some bugs to improve product compatibility and quality.
* Trial version period extends from 15 days to 30 days.

“This backup solution is ideal for small and medium-sized business. When disaster happens, you can restore all the critical data to avoid expensive downtime, and get back to work soon,” says Wan Jianhua, General Manager of EaseUS Software. As he described, EaseUS aims at offering the complete data security protection solution for your data and business.

About EaseUS Software:
EaseUS, Founded in 2004, is the professional IT solutions provider. It mainly offers data recovery, backup, system optimization and partition manager for home, education and SMB users. During the 10 years, EaseUS has established itself as a fast-growing international company with over 100 million wonderful users around the world. Here is the homepage: http://www.easeus.com/. 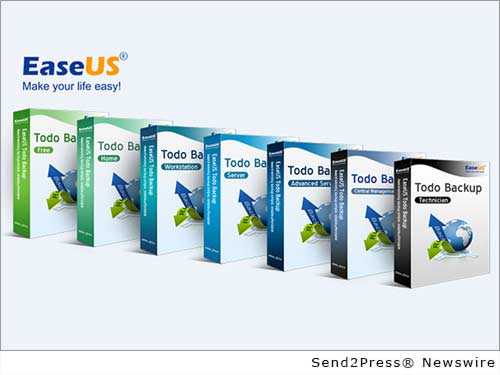 NEWS ARCHIVE NOTE: this archival news content, issued by the news source via Send2Press Newswire, was originally located in the Send2Press® 2004-2015 2.0 news platform and has been permanently converted/moved (and redirected) into our 3.0 platform. Also note the story “reads” counter (bottom of page) does not include any data prior to Oct. 30, 2016. This press release was originally published/issued: Mon, 18 Aug 2014 15:03:52 +0000

View More New York Business News
"This backup solution is ideal for small and medium-sized business. When disaster happens, you can restore all the critical data to avoid expensive downtime, and get back to work soon," says Wan Jianhua, General Manager of EaseUS Software.