EaseUS Newly Delivers Todo PCTrans 9.0 with Capability to Transfer Programs to Other Partitions on Local PC

Computers and applications increasingly get fast outdated. Migrating important data and applications helps to take what matters most with the new devices or OS without data loss and interruption on normal operation. EaseUS Todo PCTrans 9.0 completes the whole PC transfer process mainly through three modes, via network connection, via image files and to other partitions on the same PC. When installing the 9.0 data transfer software on both current PC and the new one, it automatically recognizes all available computers in the same LAN as the target machines if PC transferring by networking is of choice.

Moving all programs directly from images is particularly simple and smooth for Windows in-place upgrade especially for Windows 10 update on the same PC to save the hassle of reinstallation. While 9.0 version PC transfer solution makes users move oft-accessed data and applications along with settings to other else partitions on local computer and arranges reasonable space for the content that truly matters. Transferring applications between local disks also spares much time and cost and minimizes the impact on original files.

Another highlight of the 9.0 edition PC transfer solution is newly-added French language and much popular programs support. Todo PCTrans 9.0 full compatibility with mainstream apps, like Adobe Photoshop, Epson Print CD and SlingPlayer, is to keep up with the trendy pace that a number of applications update at a soaring speed.

Whether transferring files to a new PC, hard drive or taking an OS in-place upgrade, indeed EaseUS 9.0 PC migration software simplifies the app, file and setting move to new computer while there is no trouble making a difference on innate data and applications and also works as a disaster proof measure for Windows 10 installing. 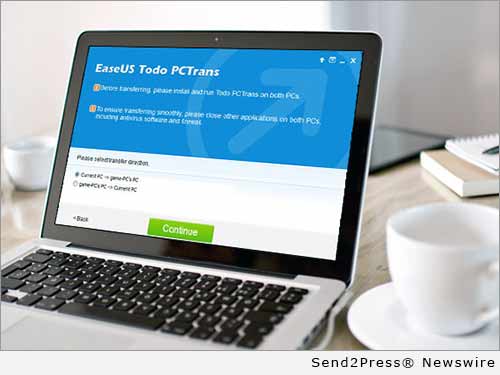 NEWS ARCHIVE NOTE: this archival news content, issued by the news source via Send2Press Newswire, was originally located in the Send2Press® 2004-2015 2.0 news platform and has been permanently converted/moved (and redirected) into our 3.0 platform. Also note the story “reads” counter (bottom of page) does not include any data prior to Oct. 30, 2016. This press release was originally published/issued: Wed, 30 Mar 2016 17:31:18 +0000