Jianhua Wan, general Manager of EaseUS, said: "Todo Backup is an ideal backup solution for small and medium-sized business, it can help users to avoid disaster caused by data loss."

Breakthroughs in this new version are mainly embodied in the adoption of newly backup technology to save users’ time during the backup. A testing report from our engineers indicates EaseUS Todo Backup 8.0 speeds up 30 percent – 50 percent depends on the backup situation. Another highlight in 8.0 is the file exclusion feature which allows users to filter the non-necessary files like system files or other files/folders that don’t want to backup to reduce the image size.

Besides, EaseUS’s engineers also improve the creating process and compatibility of WinPE in Todo Backup 8.0. No need to install AIK/WAIK component during the WinPE creation process while better support for UEFI system and later system windows 7/8/8.1.

So far, over 6,000,000 home and business users’ computer is under protection with EaseUS Todo Backup. In the meantime, EaseUS Todo Backup is awarded by the editors from Toptenreviews, PCworld, Lifehacker, etc. More and more people prefer to choose Todo Backup because it is simple, reliable, flexible and cost-effective. The full featured backup and clone software can backup system, files, Outlook email, clone partition/disk, restore system to dissimilar hardware, etc.

As Jianhua Wan, general Manager of EaseUS, said: “Todo Backup is an ideal backup solution for small and medium-sized business, it can help users to avoid disaster caused by data loss.” 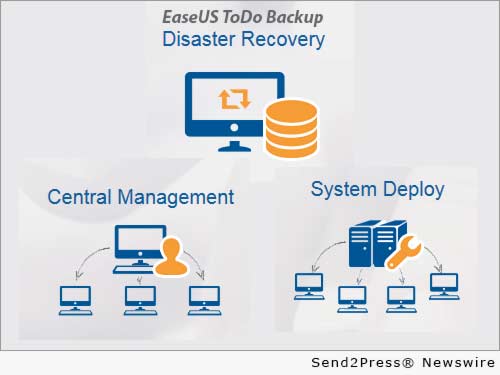 NEWS ARCHIVE NOTE: this archival news content, issued by the news source via Send2Press Newswire, was originally located in the Send2Press® 2004-2015 2.0 news platform and has been permanently converted/moved (and redirected) into our 3.0 platform. Also note the story “reads” counter (bottom of page) does not include any data prior to Oct. 30, 2016. This press release was originally published/issued: Thu, 18 Dec 2014 15:18:20 +0000