NEW YORK CITY, N.Y., July 22, 2015 (SEND2PRESS NEWSWIRE) — Windows 10 will officially launch on July 29, 2015. However, there remain nostalgic people who still intend to go back to the previous Windows operating system for different reasons. EaseUS Software just released EaseUS System GoBack Free to let users have access to a tool to roll back from Windows 10 for free.

Microsoft is about to bring users a promising Windows 10 future, but things always will not go according to the plan. There is no doubt that from different situations lies the possibility of Windows 10 downgrade. About how to uninstall Windows 10, Microsoft permits users to go back from Windows 10 only in a month with limit.

EaseUS Software (www.easeus.com), specialized in data recovery and backup, released EaseUS System GoBack Free to enable users to safely downgrade from Windows 10. In case of encountering any issue after installing the update, backing up system and recovery will benefit a lot.

Rolling back to the former OS can be completed in only three simple steps using EaseUS System GoBack Free. Backing up the whole system is a full system protection to prepare for Windows 10 upgrade. Certainly, data backup software, like EaseUS Todo Backup, also can come into use on system backup and recovery. Problems often occur unexpectedly. Taking a precaution – for example, system backup – is especially a good precaution. What users always really worry about is whether it is possible to downgrade to the old adapted system when it is found that the new Windows 10 isn’t up to expectation.

Some users cannot get past the habit or comfort of the old Windows system experience. After using Windows 10 for a few days, it’s potentially an issue to get messed up by unfamiliar interfaces or apps. System crashes also may be unavoidable to some degree. Various reasons can result in the decision to change Windows 10 back.

In spite of a month of Windows 10 Rollback, it only takes effect on an in-place upgrade from Windows 7, Windows 8 or Windows 8.1. Another condition is that the free upgrade is derived from the base qualifying license. Over a month, there is a need to reinstall the version of Windows that comes with the PC using fresh installation media and its product key.

Giving enough time and freedom to get the previous system back, EaseUS System GoBack Free shows more concerns for users’ utility and experience. It gives a relief of users’ anxiety when faced with a brand new Windows OS upgrade. If necessary, downgrading to the old system is a feasible scheme. 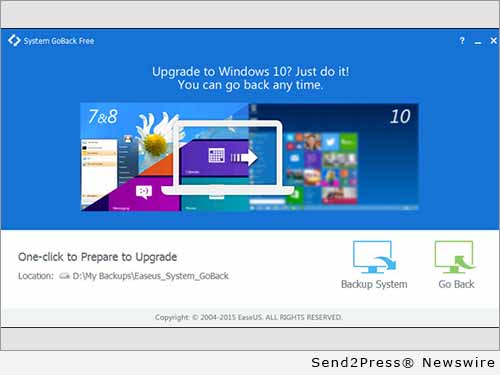 NEWS ARCHIVE NOTE: this archival news content, issued by the news source via Send2Press Newswire, was originally located in the Send2Press® 2004-2015 2.0 news platform and has been permanently converted/moved (and redirected) into our 3.0 platform. Also note the story “reads” counter (bottom of page) does not include any data prior to Oct. 30, 2016. This press release was originally published/issued: Wed, 22 Jul 2015 18:06:10 +0000