Famed ‘Blue Boy’ Stamp to Be Offered at Auction by H.R. Harmer

NEW YORK, N.Y., May 13, 2019 (SEND2PRESS NEWSWIRE) — H.R. Harmer will conduct the sale of the first part of the renowned “ERIVAN” Collection of United States Postal History in New York City. Included in this sale will be the famed “Alexandria Blue Boy” stamp, which last appeared at public auction in 1967. Opening price for the stamp will start at $1,000,000 with industry experts agreeing the final price is likely to go much higher. 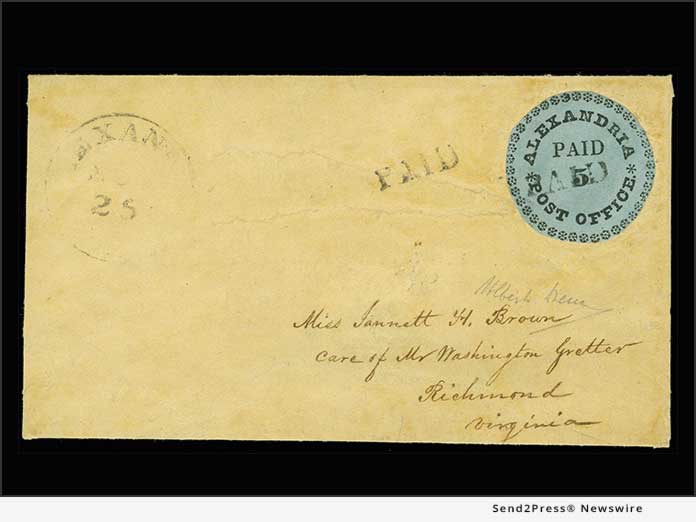 Issued in Alexandria, Virginia in the 1840s, before the United States federal government had even issued postage stamps, the “Blue Boy” has long been an icon of American philately. The envelope bearing the “Blue Boy,” which once contained a letter detailing a forbidden romance between young lovers of different religions, was supposed to have been burned upon opening. Fortunately for stamp collectors today the young lady disobeyed these orders, as today the “Blue Boy” is the only stamp of its kind in existence.

The “Blue Boy” was featured in Life Magazine in 1954 as one of the “world’s rarest stamps.” Although it has been exhibited publicly only twice in recent years, it remains one of the most storied and iconic of all postage stamps – not just in America, but worldwide.

The “Blue Boy” is more than merely a postage stamp; it is an icon of American history, on par with a copy of Action Comics #1 (the first appearance of Superman) or the legendary T206 Honus Wagner (the most famous of all baseball cards).

Assembled by German business magnate and philanthropist Erivan Haub over the course of decades, the “ERIVAN” Collection represents one of the most impressive collections of American envelopes ever compiled. From the introduction of the postage stamp in North America in the mid-1840s through the emergence of the United States as a world superpower at the turn of the 20th century, the “ERIVAN” Collection is rife with stories of romance and adventure, expansion and progress.

The “ERIVAN” Collection traces the history of the United States, from the unnatural stillness before the Civil War through the most ferocious conflict ever fought on American soil. It tells a story of constant motion, of perpetual movement westward. It brings to life some of this nation’s greatest victories and most crushing defeats. The “ERIVAN” Collection truly is a physical manifestation of America’s past.

Included in the “ERIVAN” Collection are many of the most celebrated items in all American philately, including some which have not been on the auction block for decades.

Also, for sale in the first offering from the “ERIVAN” Collection will be one of two envelopes in existence carried by the first eastbound trip of the Pony Express. While the service only catered to the wealthiest of Americans when it was initiated in 1860, its status as an icon of American progress and resilience has grown exponentially over the years. 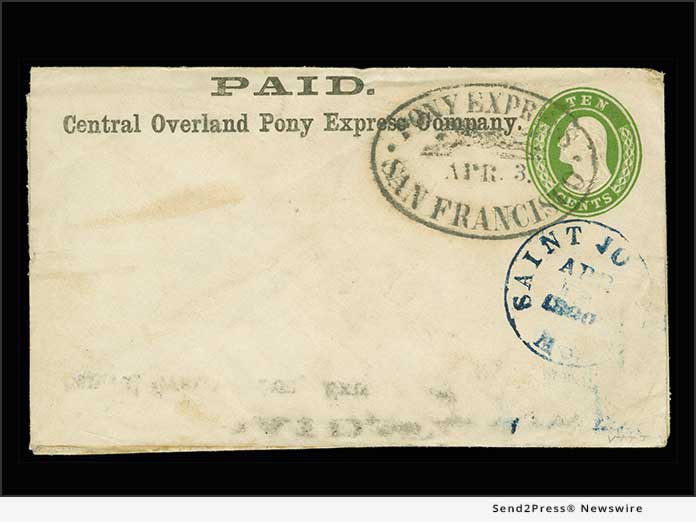 What few people realize is that only a few hundred letters sent via the Pony Express still exist today, and even the most “common” are still highly prized by collectors. The value of an envelope carried on the inaugural trip of the service cannot be measured in merely monetary terms—it is truly a keystone of Americana.

As the sales progress, more icons of American philately will be reintroduced to the market after decades in private hands. The famed “Running Chicken” cover from Waterbury, Connecticut, which features three bold strikes of a fancy cancellation carved from cork by an artistic postmaster, was last offered in 1995. Provisional postage stamps from Lockport, New York and Boscawen, New Hampshire, each of which is wholly unique, will be sold, as will an envelope carried by Pony Express that is addressed to the Honorable Abraham Lincoln in the months leading up to his inauguration.

After this initial sale taking place on June 22, 2019, H.R. Harmer will proceed with nine additional sales of the “ERIVAN” Collection, to be held every spring and fall through 2023.

Henry R. Harmer, a signatory of the exclusive “Roll of Distinguished Philatelists,” founded the company that bears his name in England in 1918. In 1940, the Harmer firm opened its New York auction gallery and quickly ascended to the top ranks of philatelic auction houses in the United States. Now celebrating nearly eight decades in the business, H.R. Harmer has recently relocated from Southern California to Midtown Manhattan, just a stone’s throw from their original location.

As a part of the Global Philatelic Network, H.R. Harmer has four sister companies in Europe and Asia; combined, the group provides stamp collectors around the world with exceptional personal service, backed by decades of experience in the marketplace. Learn more about the company at: https://hrharmer.com/.

[2] https://www.Send2Press.com/300dpi/19-0513s2p-hrh-pony-first-300dpi.jpg
Caption: Also for sale in the first offering from the “ERIVAN” Collection will be one of two envelopes in existence carried by the first eastbound trip of the Pony Express.

ABOUT THE NEWS SOURCE:
H.R. Harmer

Henry R. Harmer, a signatory of the exclusive "Roll of Distinguished Philatelists," founded the company that bears his name in England in 1918. In 1940, the Harmer firm opened its New York auction gallery and quickly ascended to the top ranks of philatelic auction houses in the United States. Now celebrating nearly eight decades in the business, H.R. Harmer has recently relocated from Southern California to Midtown Manhattan, just a stone's throw from their original location.

LEGAL NOTICE AND TERMS OF USE: The content of the above press release was provided by the “news source” H.R. Harmer or authorized agency, who is solely responsible for its accuracy. Send2Press® is the originating wire service for this story and content is Copr. © H.R. Harmer with newswire version Copr. © 2019 Send2Press (a service of Neotrope). All trademarks acknowledged. Information is believed accurate, as provided by news source or authorized agency, however is not guaranteed, and you assume all risk for use of any information found herein/hereupon.