GASTONIA, N.C., May 3, 2017 (SEND2PRESS NEWSWIRE) — The father and son team, Elijah’s Xtreme® Gourmet Sauces, based in Gastonia, North Carolina, have proven again they have something special by winning a “1st place Screaming MiMi Award” for their Reaper Pepper sauce. 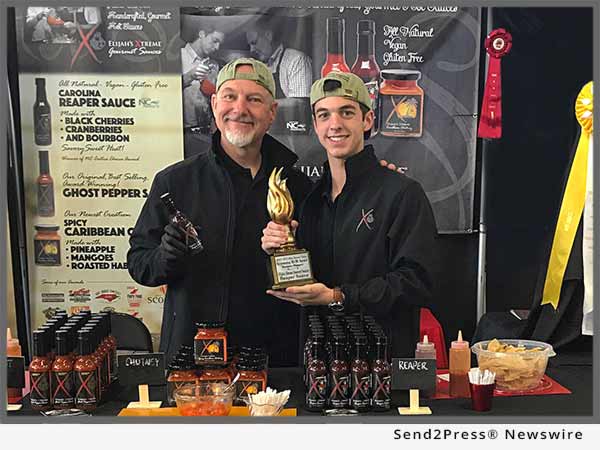 The sauce is a blend of black cherries, cranberries and Kentucky bourbon with the Carolina Reaper Pepper, the World’s hottest pepper.

For those who love all things spicy, it’s no wonder Brooklyn, New York known for great food and top chefs, would host the Screaming MiMi Awards – The Ultimate Award in the hot sauce industry – at the 5th annual NYC Hot Sauce Expo.

Elijah’s Xtreme was launched in mid-June 2014, after several years of tinkering with different recipes. They set their goal to create a new hotter, thicker, gourmet hot sauce and most importantly, focused not only on heat, but a superior flavor. Their first creation – Elijah’s Xtreme Ghost Pepper Sauce – blends heat with a unique flavor and has won 7 awards. The second creation – Elijah’s Xtreme Reaper Sauce was launched in April 2016 at the NYC Hot Sauce Expo, where it sold out!

“We are humbled by winning so many awards for our sauces,” said Bret Morey founder and partner. “I think it’s our passion, care and uncompromising attention to detail of each product that makes the difference.”

Their amazing win came right on the heels of the launch of their Ghost Pepper sauce, now available in 120 Tijuana Flats restaurants in 7 states. From humble beginnings, they started their small business from the ground up, finding support though local shops willing to sell their bold hot sauces.

Elijah’s Xtreme Gourmet Sauces has grown over 258 percent per year and is now available in over 349 stores nationwide, including all Bass Pro Shops, Central Markets in Texas, KeHE distributors, Ingles Markets in North Carolina, Jungle Jim’s in Ohio, in New Zealand, the Turks & Caicos Islands and on Amazon Prime.

View More Food and Beverage News
"We are humbled by winning so many awards for our sauces," said Bret Morey founder and partner. "I think it's our passion, care and uncompromising attention to detail of each product that makes the difference."

ABOUT THE NEWS SOURCE:
Elijah's Xtreme

Elijah's Xtreme was born from a father and son’s love of hot peppers and passion to create a more flavorful, thicker, hotter, hot sauce. After more than a decade of growing a variety of hot peppers and tinkering with homemade hot sauce recipes, late in the summer of 2013 the father and son team created the perfect balance of heat and flavor. Elijah's Xtreme™ Ghost Pepper Sauce officially launched in June of 2014.

LEGAL NOTICE AND TERMS OF USE: The content of the above press release was provided by the “news source” Elijah's Xtreme or authorized agency, who is solely responsible for its accuracy. Send2Press® is the originating wire service for this story and content is Copr. © Elijah's Xtreme with newswire version Copr. © 2017 Send2Press (a service of Neotrope). All trademarks acknowledged. Information is believed accurate, as provided by news source or authorized agency, however is not guaranteed, and you assume all risk for use of any information found herein/hereupon.