"It's amazing how word of mouth has really helped grow our brand," says Bret Morey, founder and partner. "I think it shows we have something very special as most ghost pepper sauces are focused solely on heat, not flavor. Ours is different and we cannot wait for the world to taste the difference."

GASTONIA, N.C., Feb. 2, 2015 (SEND2PRESS NEWSWIRE) — For those who appreciate the hotter things in life, it would make sense that Irving, Texas would play host to the Fiery Food Challenge – 10th annual Zest Fest. Over 10,000 attended the hottest food festival and competition yet, Zest Fest 2015, where over 160 spiciest exhibitors were challenged to stand out in the fast-growing market of spicy foods and hot sauces. The father and son team, Elijah’s Xtreme™ Ghost Pepper Sauce, based in Gastonia, N.C., proved they have something special by winning 1st Place – Hot Sauce in the coveted Peoples Choice Award.

Elijah’s Xtreme™ was launched in mid-June 2014, after several years of tinkering with different recipes. In the summer of 2013 Elijah (son) and Bret (father) perfected their recipe. They set their goal to create a new hotter, thicker, gourmet hot sauce and most importantly, focused not only on heat, but a superior flavor. Their creation – Elijah’s Xtreme Ghost Pepper Sauce – blends heat and their unique flavor, allowing them to win.

Their amazing win came right on the heels of their launch of their sauce, now available in Bass Pro Shops nationwide, Pepper Palace stores. From humble beginnings they started their small business from the ground up, finding support though several local shops willing to sell their bold hot sauce.

“It’s amazing how word of mouth has really helped grow our brand,” says Bret Morey, founder and partner. “I think it shows we have something very special as most ghost pepper sauces are focused solely on heat, not flavor. Ours is different and we cannot wait for the world to taste the difference.”

As the hot sauce movement in the culinary world continues to grow, Elijah’s Xtreme™ Ghost Pepper Sauce stood above the competition and fans of heat and flavor took notice.

About Elijah’s Xtreme Ghost Pepper Sauce:
Elijah’s Xtreme™ was founded on the rapid growing demand for hotter, better tasting, hot sauce. Father and son, Bret and Elijah Morey used the Naga Jolokia or Ghost Pepper (which is ranking 3rd of the world’s hottest peppers) and Habaneros to add more flavor and blend with other fresh ingredients that give Elijah’s Xtreme a delicious taste that balances both the flavor and the heat. The goal being a thicker, hotter, more flavorful, gourmet style blend that would taste great and provide just enough spice to add a nice kick to any recipe or dish. 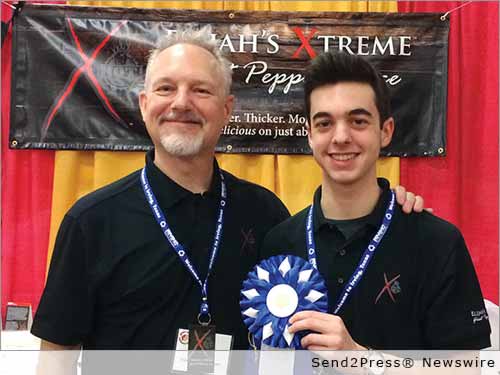 NEWS ARCHIVE NOTE: this archival news content, issued by the news source via Send2Press Newswire, was originally located in the Send2Press® 2004-2015 2.0 news platform and has been permanently converted/moved (and redirected) into our 3.0 platform. Also note the story “reads” counter (bottom of page) does not include any data prior to Oct. 30, 2016. This press release was originally published/issued: Mon, 02 Feb 2015 08:00:03 +0000

View More Food and Beverage News
"It's amazing how word of mouth has really helped grow our brand," says Bret Morey, founder and partner. "I think it shows we have something very special as most ghost pepper sauces are focused solely on heat, not flavor. Ours is different and we cannot wait for the world to taste the difference."

ABOUT THE NEWS SOURCE:
Elijah's Xtreme

Elijah's Xtreme was born from a father and son’s love of hot peppers and passion to create a more flavorful, thicker, hotter, hot sauce. After more than a decade of growing a variety of hot peppers and tinkering with homemade hot sauce recipes, late in the summer of 2013 the father and son team created the perfect balance of heat and flavor. Elijah's Xtreme™ Ghost Pepper Sauce officially launched in June of 2014.

LEGAL NOTICE AND TERMS OF USE: The content of the above press release was provided by the “news source” Elijah's Xtreme or authorized agency, who is solely responsible for its accuracy. Send2Press® is the originating wire service for this story and content is Copr. © Elijah's Xtreme with newswire version Copr. © 2015 Send2Press (a service of Neotrope). All trademarks acknowledged. Information is believed accurate, as provided by news source or authorized agency, however is not guaranteed, and you assume all risk for use of any information found herein/hereupon.