"Almost 50 percent of our business is to change or alter an existing tattoo," says Gavin and Amanda Bowe, of In Your Face Tattooz.

FOND DU LAC, Wis., Aug. 3, 2015 (SEND2PRESS NEWSWIRE) — Rejuvatek Medical Inc., Sandy, Utah, launches the first Tatt2Away® (www.tatt2away.com) non laser tattoo removal system in the state of Wisconsin. In Your Face Tattooz decided to lead the way in Wisconsin by becoming the first certified Tatt2Away Center in the state. This is great news for the almost 8 million Americans burdened with “tattoo regret” but unwilling to go through the pain and cost of a laser.

Gavin and Amanda Bowe, owners of In Your Face Tattooz, have been intricately involved in the progression of the tattoo industry from permanent cosmetics, to body art, to tattoos of all forms, colors, and medium. “We take our art seriously and feel that we have a big responsibility for the impact on the life of the person we are tattooing,” Gavin stated. This responsibility goes beyond the meaning of the initial tattoo (whomever may have applied it) and to the current feelings of the tattoo wearer.

“Almost 50 percent of our business is to change or alter an existing tattoo. We don’t want to be in the position of telling that person that we can cover their tattoo up by putting a full sleeve over it if that is not what they want. Many of our customers have become like family and we want them to be happy with the art that we are so honored to be asked to place on them,” continued Bowe. “We looked at lasers for tattoo removal but didn’t find them to provide much of a value proposition. We wanted to be able to remove pinpoint pieces of a tattoo and have noticeable removal results for our customers so that we can make their existing art better, not just different; which is why we chose Tatt2Away.”

Tatt2Away is a patented tattoo removal system that somewhat mimics placing a tattoo on the body except that instead of ink, a proprietary all natural solution is infused into the ink that binds with the pigment and brings it up out of the body along with the scab that forms. It is based on the natural healing process of the body, such as when you scrape your knee and a scab forms and later falls off leaving normal skin underneath.

Rejuvatek Medical is placing only a few Tatt2Away systems per city, offering a limited exclusivity to those tattoo studios that see the opportunity first and act on it. For more information, go to http://www.Tatt2Away.com/ or contact Jack Savage, CEO, Rejuvatek Medical, Inc. 855-252-2929 jacksavage@Tatt2Away.com. 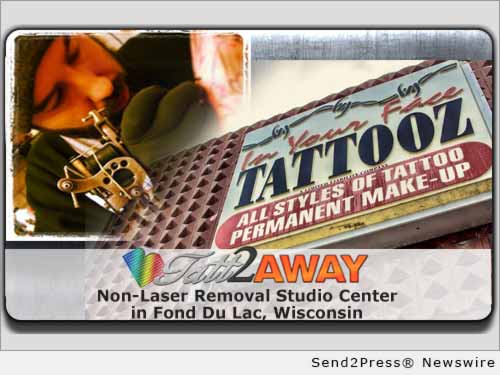 NEWS ARCHIVE NOTE: this archival news content, issued by the news source via Send2Press Newswire, was originally located in the Send2Press® 2004-2015 2.0 news platform and has been permanently converted/moved (and redirected) into our 3.0 platform. Also note the story “reads” counter (bottom of page) does not include any data prior to Oct. 30, 2016. This press release was originally published/issued: Mon, 03 Aug 2015 15:05:10 +0000

View More Business News
"Almost 50 percent of our business is to change or alter an existing tattoo," says Gavin and Amanda Bowe, of In Your Face Tattooz.