LA MESA, Calif., Jan. 17, 2013 (SEND2PRESS NEWSWIRE) — LegalizeFerrets.org announces new WhiteHouse.gov petition to help legalize ferrets in California. Over the past 25 years California ferret lovers have worked diligently to catch up to the rest of the 48 continental states to have our right for legal ferret ownership.

“What is taken for granted in the rest of the world; i.e. domestic ferrets are domestic animals and present no threat to the environment has not convinced the California Fish and Game to relent on their ban or bias regarding these companion animals,” says Pat Wright of Legalize Ferrets.

Despite the fact they are already here in large numbers. California has more pet ferrets than #2 and #3 states combined (New York and Texas) – The California Fish and Game Commission won’t even answer our most basic questions.

Now that a WhiteHouse.gov petition is floating around and gaining some press attention. The Fish and Game Commission is not just blocking, but obfuscating our rights to have this issue dealt with.

The petition can be found at http://wh.gov/P2FB .

Neither document was accepted for processing. Sonke Mastrup, now Executive Director of the Fish and Game Commission said there was not enough budget or staff time to process it. We even offered to pay staff time but never received a response.

Now they are rejecting the document “too limited and not scientifically valid.”

A Public Records Request act was filed on January 14th and has yet to be acknowledged. We want to know who evaluated the document and when did they do it. Most likely it has never been read by anyone at the Fish and Game Department. This is yet another example of how unfair they are.

We’re not asking them to legalize ferrets. We’re asking them to give the issue a fair hearing. And it’s falling not on deaf ears – but on hostile ears.

Do it for the little guy and sign our petition at http://wh.gov/P2FB .

That’s why a little nudge from the White House; an acknowledgment that we’re being treated unfairly would be extremely welcomed by California’s besieged ferret owners. 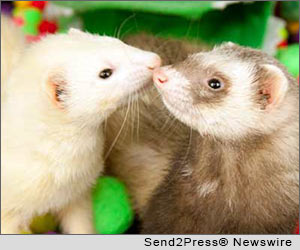 NEWS ARCHIVE NOTE: this archival news content, issued by the news source via Send2Press Newswire, was originally located in the Send2Press® 2004-2015 2.0 news platform and has been permanently converted/moved (and redirected) into our 3.0 platform. Also note the story “reads” counter (bottom of page) does not include any data prior to Oct. 30, 2016. This press release was originally published/issued: Thu, 17 Jan 2013 18:35:28 +0000

LEGAL NOTICE AND TERMS OF USE: The content of the above press release was provided by the “news source” Legalize Ferrets or authorized agency, who is solely responsible for its accuracy. Send2Press® is the originating wire service for this story and content is Copr. © Legalize Ferrets with newswire version Copr. © 2013 Send2Press (a service of Neotrope). All trademarks acknowledged. Information is believed accurate, as provided by news source or authorized agency, however is not guaranteed, and you assume all risk for use of any information found herein/hereupon.