"Reasons for banning ferrets are nonsense and don't hold up under scrutiny. An Environmental Report commissioned by LegalizeFerrets.org shows that concerns about ferrets going feral, attacking wildlife or children or any damage to the environment are unfounded," says Pat Wright of Legalize Ferrets.

LA MESA, Calif., April 1, 2015 (SEND2PRESS NEWSWIRE) — Tired of working and waiting for ferret legalization, which never comes despite thirty years of efforts – Legalize Ferrets (LegalizeFerrets.org) is planning a ballot initiative to free our domestic ferrets from unnecessary and unfair regulation.

April 2 is National Ferret Day in the USA and California ferret lovers are using the occasion to launch a crowdfunding campaign on Indiegogo at http://igg.me/at/CLIFF/x/292522.

The goal is to raise $100,000 to pay petitioners to help get the California Legalization Initiative for Ferrets (CLIFF) on the ballot.

Ferrets are legal in 48 states. Only Hawaii and California, along with some cities, most notably New York City continues to ban the pets.

“Reasons for banning ferrets are nonsense and don’t hold up under scrutiny. An Environmental Report commissioned by LegalizeFerrets.org shows that concerns about ferrets going feral, attacking wildlife or children or any damage to the environment are unfounded,” says Pat Wright of Legalize Ferrets. “But the report has never been read by the California Fish and Game Commission – although they rejected it as incomplete. A Public Records Request Act showed that no one at the Commission or Fish and Wildlife Dept. had read the document.” 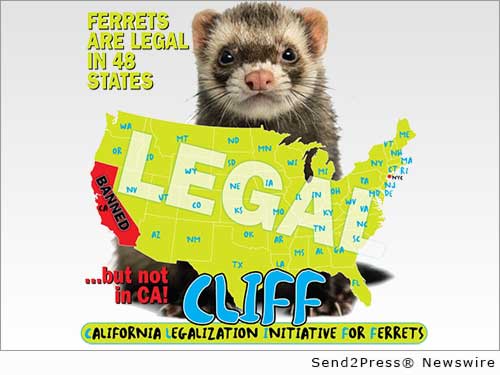 Appeals to regulators and legislators have fallen on deaf ears once again, and 2015 will not see any bill to legalize ferrets in the Golden State.

But new rules on the initiative process in California open up the possibilities. Fewer signatures are required and once we reach 25 percent of the required, we get in front of the California legislature.

“California ferret lovers believe we can also do a massive volunteer effort to collect signatures,” adds Wright. “But no all-volunteer effort has ever gotten an initiative on the California ballot. We want to pay petitioners $100,000 to get us a quarter of the way there – and at least get us in front of the legislators.”

Learn more about the organization at: http://legalizeferrets.org/. 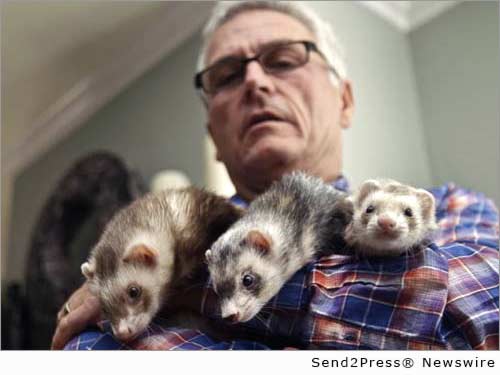 NEWS ARCHIVE NOTE: this archival news content, issued by the news source via Send2Press Newswire, was originally located in the Send2Press® 2004-2015 2.0 news platform and has been permanently converted/moved (and redirected) into our 3.0 platform. Also note the story “reads” counter (bottom of page) does not include any data prior to Oct. 30, 2016. This press release was originally published/issued: Wed, 01 Apr 2015 16:18:57 +0000

View More Ballots Bills and Laws News
"Reasons for banning ferrets are nonsense and don't hold up under scrutiny. An Environmental Report commissioned by LegalizeFerrets.org shows that concerns about ferrets going feral, attacking wildlife or children or any damage to the environment are unfounded," says Pat Wright of Legalize Ferrets.

LEGAL NOTICE AND TERMS OF USE: The content of the above press release was provided by the “news source” Legalize Ferrets or authorized agency, who is solely responsible for its accuracy. Send2Press® is the originating wire service for this story and content is Copr. © Legalize Ferrets with newswire version Copr. © 2015 Send2Press (a service of Neotrope). All trademarks acknowledged. Information is believed accurate, as provided by news source or authorized agency, however is not guaranteed, and you assume all risk for use of any information found herein/hereupon.