"We have won hundreds of design and building awards in our time," John Cannon, CEO and president, said, "but this one from our community is the most personal for me."

“We have won hundreds of design and building awards in our time,” John Cannon, CEO and president, said, “but this one from our community is the most personal for me. There are many builders in southwest Florida – and we all are proud of our work – but to be recognized by the community, and be awarded ‘best of the best’ year after year, is one of the highest honors we are proud to accept.”

John Cannon, along with business partner and wife Phillipa, began building homes in the Preserve at Misty Creek and Plantation Golf & Country Club in the late 1980s. In 1995, John Cannon Homes became one of the original approved builders in Lakewood Ranch in southeastern Manatee County; 21 years later, his award-winning custom homes can be found throughout the villages and communities of this master planned community.

Of the five new models slated for 2016-2017, two will be built in Lakewood Ranch: The Akarra IV, in The Vineyards at The Lake Club and The Talia, in Seacroft at Country Club East. The Islands on the Manatee River will be home to The Corindi, and The Victoria, will be built at The Concession, a luxury, gated 1,200-acre community featuring an exquisite golf course designed by Jack Nicklaus and Tony Jacklin. The Ellora will be built in the brand-new development, Indian Lakes, located east of I-75 on Fruitville Road in Sarasota. The models, range in size from 3,376 to 5,193 sq. ft.

In addition to building stunning residential homes in planned communities, John Cannon has a solid reputation for on-your-lot building having built over 350 waterfront homes on client-owned lots throughout southwest Florida. One of Cannon’s newest projects, his “Siesta Enclave,” near Siesta Key, will be home to only eight luxury custom residences; home and lot packages are available now starting at $1 million.

Clients and residents also give him high marks for respecting the traditions and environment of established neighborhoods. The Miah, a 4,225 sq. ft. Showcase home opened recently in the sought-after “west of the Trail” area of Sarasota. One of the first things a visitor to this stylish Spanish Revival experiences is how it complements the existing surrounding homes while Cannon has updated the design style to be contemporary and sophisticated.

John Cannon Homes continues to build on his reputation for excellence in customer service with a high-end interactive experience in a newly expanded design center. Clients are able to sit down with professional staff and touch, see and feel materials they can choose for their custom homes. Along with competitive pricing and attention to detail, and first-class reputation for excellence in design and building, the readers of the Sarasota Herald-Tribune in both Sarasota and Manatee counties have signaled their resounding approval, now for 24 consecutive years. 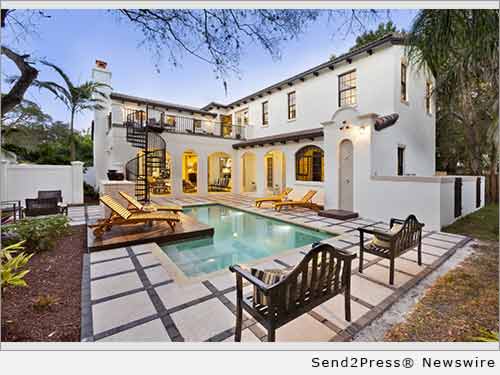 NEWS ARCHIVE NOTE: this archival news content, issued by the news source via Send2Press Newswire, was originally located in the Send2Press® 2004-2015 2.0 news platform and has been permanently converted/moved (and redirected) into our 3.0 platform. Also note the story “reads” counter (bottom of page) does not include any data prior to Oct. 30, 2016. This press release was originally published/issued: Mon, 29 Feb 2016 16:21:38 +0000

View More Awards and Honors News
"We have won hundreds of design and building awards in our time," John Cannon, CEO and president, said, "but this one from our community is the most personal for me."

LEGAL NOTICE AND TERMS OF USE: The content of the above press release was provided by the “news source” John Cannon Homes Inc. or authorized agency, who is solely responsible for its accuracy. Send2Press® is the originating wire service for this story and content is Copr. © John Cannon Homes Inc. with newswire version Copr. © 2016 Send2Press (a service of Neotrope). All trademarks acknowledged. Information is believed accurate, as provided by news source or authorized agency, however is not guaranteed, and you assume all risk for use of any information found herein/hereupon.