DALLAS, Texas, May 10, 2022 (SEND2PRESS NEWSWIRE) — U.S. Carbon Capture announces that Director of Land Jonathan R. Grammer will speak on the campus of Texas Tech University June 1 on the growing business of Carbon Capture in the State of Texas. The engagement, part of a larger convention addressing the state’s energy grid, comes just months after Exxon Mobil announced its estimates of a foreseeable $4.5 trillion market for carbon capture and storage by 2050 as companies race to achieve net-zero. 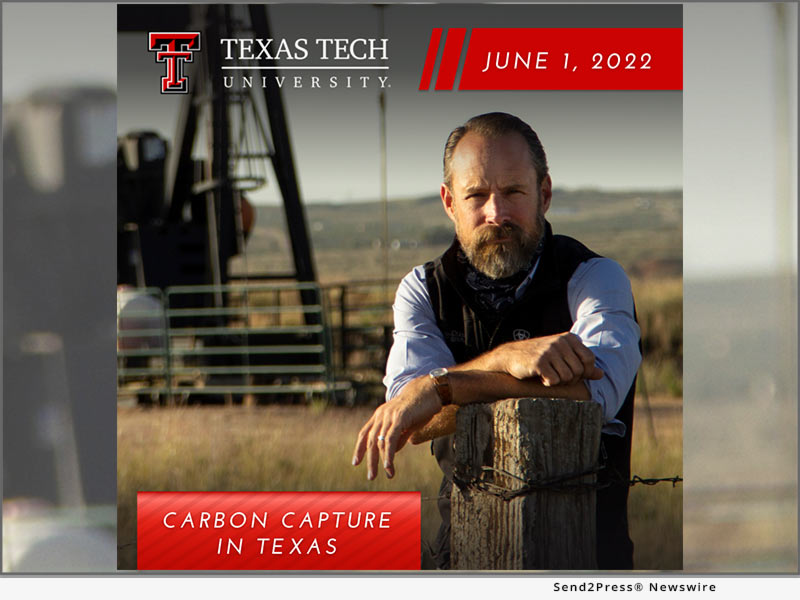 In March, the Securities and Exchange Commission handed down their proposed rules changes regarding company disclosures of carbon emissions for not only direct emissions, but also indirect emissions from purchased electricity providers.

With now growing global attention and pressure on the need to restrict carbon dioxide emissions, the fossil fuel industry seems to be finding itself in an increasingly tight predicament as it struggles to implement solutions to reduce its carbon footprint. It’s a predicament which Grammer believes has plausible solutions that can benefit both the fossil fuels industry as well as the growing renewable markets. It is also one which Grammer, a petroleum landman and attorney and who founded U.S. Carbon Capture in 2021, says has been decades in the making.

“Our team’s early work in carbon capture began actually ten years ago in West Texas,” states Grammer. “At that time, we were concentrated on separation of the CO2 component from industrial flue gas for utilization in resurrecting several depleted oil fields. We also learned about the reservoir engineering surrounding safely securing CO2 underground.”

Now with its qualified team in place and two projects under development, U.S. Carbon Capture has emerged as one of the more likely front-runners in the ever-growing carbon capture market in Texas.

“The issue facing the energy industry in Texas,” continues Grammer, “is finding ways to safely preserve utilizing carbon emitting sources in power generation. Carbon dioxide, most commonly associated with the burning of fossil fuels in power plants, oil refineries and other industrial sources can be effectively captured and placed either in underground storage, known commonly as sequestration, or used in enhanced oil recovery. Carbon dioxide, while primarily classified as a pollutant, also has enormous potential as a commodity. Its ability to increase the recovery rate of oil production could prove beneficial to the United States in its large effort to decrease dependency on foreign oil sources.”

“Carbon capture technologies are progressing rapidly,” stated Ken Holtgrieve, Director of Facilities for U.S. Carbon Capture. Holtgrieve, former Manager for CO2 Development at Kinder Morgan continued, “New carbon capture and storage projects are being announced almost daily somewhere around the world. Suppliers and contractors are gearing up to meet the demand. CCS is no longer just a dream. It is becoming reality.”

U.S. Carbon Capture’s Reservoir Engineer Mike Cain added, “Some may find it ironic that professionals from the oil and gas industry are leading the charge on addressing climate change through carbon capture.” Cain, with a decade’s worth of experience as a CO2 Reservoir Engineer, continued, “they are the experts when it comes to all aspects of carbon capture ranging from surface facilities, to land, legal, and regulatory issues, to wells and understanding injection into subsurface reservoirs. US Carbon Capture has built its leadership team with these key aspects of CCS/CCUS in mind.”

Grammer will be speaking as part of the GridNext and Global Laboratory for Energy Asset Management and Manufacturing Conference at Texas Tech University on the latest advances in the fossil fuels and renewables industries towards increasing reliability and resiliency in the ERCOT Grid.

U.S. Carbon Capture provides all-inclusive consultation for GHG emission handling with the goal of maximizing profits and minimizing costs for our clients, who are GHG emitters and end-users of GHGs. We leverage synergies between our clients and end-users and access all available government incentives to the benefit of our clients. Our consulting services include up-front alternative design scenarios with defensible economic forecasts that aid our clients in selecting their best-fit scenario. Our designs and economic forecasts are created by targeted seasoned professionals in the disciplines of Land and Legal, Finance, Facilities Engineering, Production and Reservoir Engineering, Geology and Geophysics, and Government Contract Procurement. The build-out and implementation phase of our projects are directed by our team in coordination with our client’s needs and direction.

LEGAL NOTICE AND TERMS OF USE: The content of the above press release was provided by the “news source” U.S. Carbon Capture or authorized agency, who is solely responsible for its accuracy. Send2Press® is the originating wire service for this story and content is Copr. © U.S. Carbon Capture with newswire version Copr. © 2022 Send2Press (a service of Neotrope). All trademarks acknowledged. Information is believed accurate, as provided by news source or authorized agency, however is not guaranteed, and you assume all risk for use of any information found herein/hereupon.