NEW YORK, N.Y., Feb. 23, 2016 (SEND2PRESS NEWSWIRE) — On March 7, 2016, Laura Gould Crandall, Executive Director of the SUDC Foundation and 2016 FACES Gala Honoree, actor and film producer Harrison Ford, and esteemed medical professionals will attend an exclusive evening at Pier Sixty at Chelsea Piers featuring dinner and both a live and silent auction to benefit the mission of FACES (Finding a Cure for Epilepsy and Seizures) and NYU Langone’s Comprehensive Epilepsy Center.

A portion of the proceeds from FACES events are to support the funding of several outstanding research projects, including the Epilepsy Diet Program and the Human Epilepsy Project.

Laura Gould Crandall is also a research scientist in the Department of Neurology at NYU School of Medicine. Crandall’s mission and subsequent honor has not been without hardship. In 1997 she lost her first child, Maria, to Sudden Unexplained Death in Childhood (SUDC) at the age of 15 months. Witnessing a breakdown in the investigative process, as well as a lack of support for the families of children who have succumbed to SUDC, she created the SUDC Foundation. SUDC works to “support families by upholding the mission of being the centralized resource for SUDC information, support, advocacy and crucial research.”

With Laura’s perseverance and six years of advocacy, President Obama signed into law the “The Sudden Unexpected Death Data Enhancement and Awareness Act” in December of 2014. The bill works “to improve the quality and consistency of data collected during the death scene investigations and autopsies to better inform prevention and intervention efforts related to stillbirths, Sudden Unexpected Infant Deaths (SUID) and Sudden Unexplained Death In Childhood (SUDC).”

Approximately 400 children between 1 and 18 years old die where no cause is found despite an autopsy and thorough investigation. These Sudden Unexplained Deaths in Childhood (SUDC) have completely evaded public awareness. As a third of SUDC cases have a history of febrile seizure, she has partnered with Orrin Devinsky, MD, professor and director of NYU Langone’s Comprehensive Epilepsy Center to create the SUDC Registry and Research Collaborative to better understand and prevent sudden unexplained death in children. The study also help families who have suffered losses similar to her own. The NYU Langone FACES Gala recognizes Crandall this year for the important contributions she has made to the field.

About Laura Gould Crandall:
Laura Gould Crandall, MA is currently a research scientist in the Department of Neurology at NYU School of Medicine, overseeing the SUDC Registry and Research Collaborative, and President and Executive Director of the SUDC Foundation. Laura is also a licensed Physical Therapist in New Jersey and New York. She earned her undergraduate and postgraduate degrees from New York University in 1990 and 1996.

In 1997, her first child, Maria, succumbed to Sudden Unexplained Death in Childhood (SUDC) at the age of 15 months. Through the death investigation of Maria, Laura was convinced that changes in the system could and should be achieved. So, she advocated for new child death investigation legislation in New Jersey, which became law in 2000. A subsequent New Jersey law regarding research passed in 2006, and in 2014, national legislation termed “The Sudden Unexpected Death Data Enhancement and Awareness Act” was signed into law by President Obama.

At the SUDC Foundation, Laura strives to support families by upholding the mission of being the centralized resource for SUDC information, support, advocacy and crucial research. Laura’s work has been important for epilepsy, because a third of SUDC cases have a history of febrile seizure. Learn more at: http://www.sudc.org/. 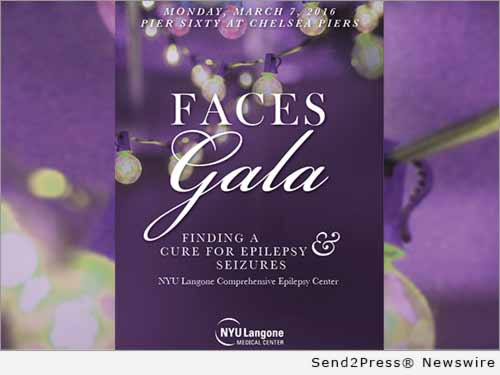 About FACES:
FACES (Finding a Cure for Epilepsy and Seizures) is affiliated with NYU Langone Medical Center and its Comprehensive Epilepsy Center. FACES funds research to improve epilepsy care, advances new therapies, and fosters a supportive community for children, families and caregivers who live with the challenges of epilepsy.

The mission of FACES is to improve the quality of life for all those affected by epilepsy and seizures.

For more information on Laura and how to purchase tickets to the Faces Gala please visit this link: http://nyulangone.org/give/events/faces-gala.

About SUDC:
The Sudden Unexplained Death In Childhood (SUDC) Foundation (formerly The SUDC Foundation created in September 2001) is tasked with providing a centralized resource for information, support and advocacy. It serves families and professionals affected by the tragedy of SUDC, and promotes awareness of SUDC in communities.

Sudden Unexplained Death in Childhood (SUDC) is the sudden and unexpected death of a child over the age of twelve months, which remains unexplained after a thorough case investigation is conducted. This must include: examination of the death scene, performance of a complete autopsy, and a review of the child and family’s medical history. SUDC is a diagnosis of exclusion – given when all known and possible causes of death have been ruled out. Learn more: http://www.sudc.org/.

NEWS ARCHIVE NOTE: this archival news content, issued by the news source via Send2Press Newswire, was originally located in the Send2Press® 2004-2015 2.0 news platform and has been permanently converted/moved (and redirected) into our 3.0 platform. Also note the story “reads” counter (bottom of page) does not include any data prior to Oct. 30, 2016. This press release was originally published/issued: Tue, 23 Feb 2016 08:00:32 +0000

Finding a Cure for Epilepsy and Seizures

LEGAL NOTICE AND TERMS OF USE: The content of the above press release was provided by the “news source” SUDC Foundation or authorized agency, who is solely responsible for its accuracy. Send2Press® is the originating wire service for this story and content is Copr. © SUDC Foundation with newswire version Copr. © 2016 Send2Press (a service of Neotrope). All trademarks acknowledged. Information is believed accurate, as provided by news source or authorized agency, however is not guaranteed, and you assume all risk for use of any information found herein/hereupon.