‘Many Names,’ a Mojave National Preserve Artist Exhibit Opens at The Kelso Depot

LOS ANGELES, Calif., Feb. 4, 2013 (SEND2PRESS NEWSWIRE) — Creating a fine art exhibit for Mojave National Preserve Artists in Residence program requires reflection, introspection, and then interpretation because artists have to develop a thematic from 1.6 million acres of visual communities and millenniums of history. Make it a Father and Son assignment that projects one voice, and the possibilities grow exponentially.

“Working with my son on the Mojave National Preserve Artist in Residence program has been fulfilling because we share the same blood and instincts,” says Poet Russell Thorburn, “and out there in the Mojave Desert we were experiencing the same sweat.”

“Many Names Have Never Been Spoken Here” is a dual-media exhibit currently on display at the Desert Light Gallery in the Kelso Visitors Center of the Mojave National Preserve through April 6, 2013. The Thorburn team present a deft combination of fine art photography from Gabriel nested against Russell’s crackling poetry.

The Mojave National Preserve will present a public reading of the poems at noon on February 28 at the Kelso Depot. The presentation layout supports Russell’s poetry on handmade paper, which replicates the Mojave’s desert floor- sand, fine rocks, splintered sticks. Gabriel’s photographs, framed in the receding white of a clear sky, appear on archival papers and balance the poetry displays through image size and proximity of placement.

“It is not unusual for Fathers and sons to work a business together,” Gabriel explains. “In our case we are both artists, so the business is making good artwork. In this project, I found that once we understood the theme, the process evolved in much the same manner as a film. Cinema effectively combines visuals with a narrative story, and so the post-production of this project was to match my shots to the poems and match poems to what was shot in the same way that a motion picture editor would match the correct visual at the right moment of the film. As with a movie, you have literal matches, such as a fence post for the Fence Post poem, and then there are emotional matches, such as the broken tree and the Johnny Cash poem.”

Russell Thorburn is the author of four books of poems, a National Endowment of the Arts recipient, and currently teaches writing and literature at Northern Michigan University in Marquette, Mich. “When I look at a frame without people,” he says, “I imagine characters who have vacated that desolate place. Looking at photographs of a black and white nature, or every Hollywood Western I have ever seen, returns to me in language influenced by shade and light, sweat and water. The words are searching for something and leave tracks toward some desolate, rewarding moment. So poetry is an extension of the visual voice, and so appropriate for the Mojave Preserve which is full of light, shadow, and words spoken and unspoken.”

The combination of the mediums produces its own aesthetics, not because of a balance between the two but rather an integration of each into one. The ‘poetic voices’ never spoken are imaginary characters experiencing the loneliness and desolation of Mojave Preserve or reveling in the solitude, quiet, and sense of everlasting peace. Each image echoes the character, sometimes with disarming snapshot simplicity, and at other times with a cinematic styling that explores the uneasy relationship between the voices and their mercurial identities.

“Many Names Have Never Been Spoken Here” invites more than a casual review. Viewers who spend some time with each voice will be amply rewarded with new desert characters, new narratives, and perhaps imagine a few of their own as they continue to journey through the vast Mojave Preserve. 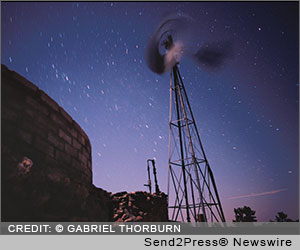 NEWS ARCHIVE NOTE: this archival news content, issued by the news source via Send2Press Newswire, was originally located in the Send2Press® 2004-2015 2.0 news platform and has been permanently converted/moved (and redirected) into our 3.0 platform. Also note the story “reads” counter (bottom of page) does not include any data prior to Oct. 30, 2016. This press release was originally published/issued: Mon, 04 Feb 2013 19:18:34 +0000

LEGAL NOTICE AND TERMS OF USE: The content of the above press release was provided by the “news source” Mojave National Preserve Artist Foundation or authorized agency, who is solely responsible for its accuracy. Send2Press® is the originating wire service for this story and content is Copr. © Mojave National Preserve Artist Foundation with newswire version Copr. © 2013 Send2Press (a service of Neotrope). All trademarks acknowledged. Information is believed accurate, as provided by news source or authorized agency, however is not guaranteed, and you assume all risk for use of any information found herein/hereupon.