"This amazing opportunity to create an enduring and memorable public realm is sure to be the talk of the area for years to come," said Chris Brown, RMA Principal and Real Estate consultant for the MCRA.

MARGATE, Fla., Jan. 6, 2015 (SEND2PRESS NEWSWIRE) — The Margate Community Redevelopment Agency (MCRA) is seeking qualified developers to develop all or a portion of a 36 acre future City Center site. Since 2003, the MCRA has engaged in assembling the properties surrounding the intersection of State Road 7 and Margate Boulevard (including the former Swap Shop) with the goal of creating a vibrant mixed use City Center which would be a destination for both City and Northwest Broward residents.

City Centers are the focus of many sustainable urban development models around the world, harkening back to an era when commercial districts were walkable and fully integrated into community life. They are organized around a clearly identifiable and energized public realm where citizens can gather and strengthen their community bonds. The Margate City Center is envisioned to be much the same, anchored by retail, dining and leisure activities, as well as residential uses.

The City of Margate and its residents already have strong community bonds, which became intensely apparent through the City’s recent rebranding which culminated in its organically derived tagline, “Together We Make it Great.” The Margate City Center will further strengthen community character and create a new urban vitality.

“This amazing opportunity to create an enduring and memorable public realm is sure to be the talk of the area for years to come,” said Chris Brown, RMA Principal and Real Estate consultant for the MCRA.

Long time City Commissioner and CRA Board Chair, Frank Talerico said, “I have been here since the CRA acquired its first property. Finally, the market is ripe, the CRA Board is engaged and we are ready to do what it takes to see the shovels in the ground.”

With the assistance of its development consultant, RMA, LLC, the MCRA has spent the last year creating a conceptual master plan for the site, identifying public improvements including a master storm water plan, public park and amphitheater and marketing City Center development opportunities to prospective real estate developers.

The Margate Community Redevelopment Agency has issued a Request for Qualifications which can be accessed at http://www.margatefl.com/citycenterrfq or by contacting the City of Margate Purchasing Department at purchasing@margatefl.com. All submissions will be due to the City’s purchasing department no later than 2 p.m., Wednesday, February 11, 2015.

The Margate Community Redevelopment Agency (http://www.margatefl.com/) was established in 1996, for the purposes of removing slum and blight conditions within the City’s major commercial corridors and encouraging private redevelopment and investment. The MCRA is an independent agency of the City of Margate and is funded through tax increment financing to carry out the activities of redevelopment. 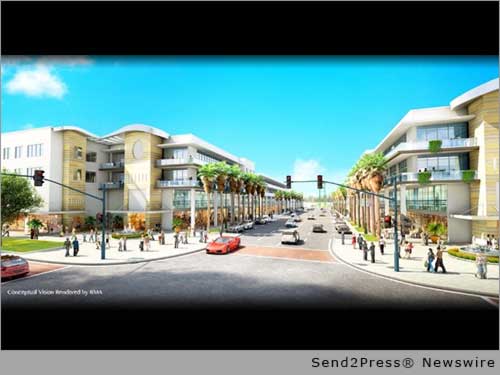 NEWS ARCHIVE NOTE: this archival news content, issued by the news source via Send2Press Newswire, was originally located in the Send2Press® 2004-2015 2.0 news platform and has been permanently converted/moved (and redirected) into our 3.0 platform. Also note the story “reads” counter (bottom of page) does not include any data prior to Oct. 30, 2016. This press release was originally published/issued: Tue, 06 Jan 2015 15:21:25 +0000

View More Building Projects News
"This amazing opportunity to create an enduring and memorable public realm is sure to be the talk of the area for years to come," said Chris Brown, RMA Principal and Real Estate consultant for the MCRA.

LEGAL NOTICE AND TERMS OF USE: The content of the above press release was provided by the “news source” Margate Community Redevelopment Agency or authorized agency, who is solely responsible for its accuracy. Send2Press® is the originating wire service for this story and content is Copr. © Margate Community Redevelopment Agency with newswire version Copr. © 2015 Send2Press (a service of Neotrope). All trademarks acknowledged. Information is believed accurate, as provided by news source or authorized agency, however is not guaranteed, and you assume all risk for use of any information found herein/hereupon.